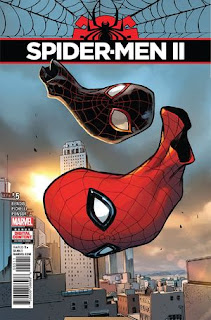 Spider-Men II comes to a conclusion in a typical Brian Michael Bendis style: a truncated climax, a surprisingly effective epilogue, and an emotive conversion in the middle between Peter Parker and Miles Morales. Bendis is about to leave Marvel, after goodness knows how many years, and this fifth and final issue of Spider-Men II really feels like his farewell.

If there's a book for which Bendis shall be remembered, it's Ultimate Spider-Man. It helped launch Marvel's Ultimate line of superhero comic books, and after killing that universe's Peter Parker he replaced him with fan favourite Mile Morales. Some years - and one event series - later, Miles joined the Marvel Universe proper and now runs around New York as his own version of Spider-Man. Spider-Men II does not just feel like an end to Miles' story as Spider-Man; it feels like a farewell to that original title. Original Ultimate Spider-Man artists Sara Pichelli and Mark Bagley both illustrate this issue, which comes with an epilogue that pops out of nowhere like a grand sign-off on the creative team's part.

Does it work as an individual single issue? Possibly not, but as a sign-off from a much-loved comic it is difficult to fault. (4/5)

Under the cut: reviews of Action Comics, Detective Comics, and Hawkman Found.

Superman and Booster Gold are on the run on an alternate Krypton in which Jor-El and Zod are allies. With history ready to change for good if they don't get away, the future of Superman's entire life is in the balance. Dan Jurgens' work regularly feels quite old-fashioned, but there's a particularly early 1990s feel about this time-travelling storyline that has spun off from the end of "The Oz Effect". Jurgens is even providing rough pencils for his art team to work from, giving it all that retro aesthetic. It's a lot of fun. (4/5)

The Victim Syndicate take over Arkham Asylum, while Anarky provokes the people of Gotham into marching against Batman's strike team. Everything that the team has built over the past 30-odd issues looks set to all come crashing down in part 3 of "Fall of the Batmen". The issue benefits from all of that build-up, with the drive of all that story bearing down on the heroes at once. Solid artwork keeps the story running fast, with a few real stand-out moments to remind Batman fans why he's their favourite superhero. (4/5)

I had fears that Hawkman Found, a tie-in to Scott Snyder and Greg Capullo's Dark Nights: Metal, would be a cheap cash-in designed to part readers with their money without significantly expanding the narrative. Sadly that's almost precisely what it is. Sure the script is well written with effective narration. Sure the artwork by Bryan Hitch and Kevin Nowlan is absolutely tremendous. It may be an aesthetically pleasing little segue, but it really doesn't add much of worth to the overal Metal story at all - nothing that couldn't be told in one speech bubble anyway. Still, it is very pretty. One for the Hawkman completists and the Hitch obsessives, I suspect. (3/5)
Posted by Grant at 5:13 PM