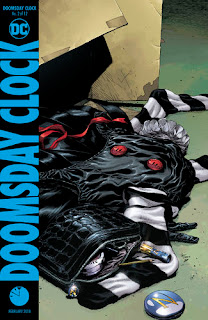 Ozymandias and Rorschach make their escape from the Watchmen universe as the Earth's government's unleash nuclear armageddon. Finding themselves on a new Earth, they split up to meet with this world's two smartest people: Lex Luthor and Bruce Wayne.

Doomsday Clock's second issue rattles along like the first. The pace is fast, the art and dialogue are strong, and the entire book is littered with deliberate callbacks and references to Alan Moore and Dave Gibbons' original miniseries master work. It also continues to leave me slightly ambivalent about it. It may be an exceptionally well crafted tribute, but that is ultimately all it can ever be. It won't break the mould like Watchmen, and it won't make a bold statement on superhero comics like Watchmen did. It's a tribute act.

Within those boundaries it's a lot of fun, but the real annoyance was never going to come from this. It will come from the subsequent series. The Rorschach monthly book. The guest appearances by Ozymandias in Justice League of America. The endless re-use of Moore and Gibbons' characters as pop culture fodder. We know its inevitable. Best enjoy these characters' final moments of dignity. Great comic book, awful implications. (4/5)

So once upon a time, IDW announced a G.I. Joe spin-off with a female-led premise that was met with the expected childish resistance from a certain male sub-division of fandom and which was cancelled due to low sales prior to a single issue being distributed to stores. That first issue is out now, and for what it's worth it is a fun and rather silly romp with various mercenaries setting up a mission with the help of guest characters from MASK and Transformers. There is a fair bit of assumed knowledge going on: the Baroness is now the Cobra Commander, and a few characters seem to have immediate back stories that the book assumes you know, but it's nothing too insurmountable. (3/5)

I really am quite keen for IDW to move on from this multi-part storyline in which Kirks and Spocks from all manner of alternative universes meet one another, because it isn't feeling cute and it isn't providing any kind of narrative dividends. Tana Ford's artwork is a little rough as well, which doesn't help matters. My only recommendation is for the hardcore to keep reading, as the storyline likely only has another issue to go, and casual readers should probably look somewhere else for a momentary Star Trek fix. (2/5)

Now that Aric has overthrown an alien government and became installed at its new head, his enemies have banded together to hire a group of mercenaries to assassinate him. This issue introduces those mercenaries as they band together to begin the mission. It's a smart, inventive issue with great science fiction and a couple of key jaw-dropping moments. Guedes' artwork is full colour painted work, which simply looks marvellous and adds a widescreen, high quality tone to the entire piece. It's a fantastic comic, and helps bring 2017 to a similarly fantastic close. (5/5)
Posted by Grant at 3:45 PM