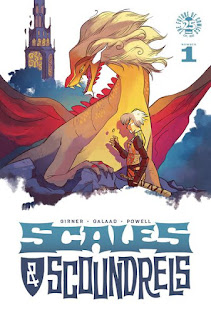 Penniless treasure hunter Luvander sets out from the city in search of hidden treasure and adventure, in this charmingly written and illustrated high fantasy comic. While Scales & Scoundrels will have its worked cut out for it to stand out among the growing number of fantasy comics on the market, writer Sebastian Girner and artist Galaad are off to a pretty sensational start.

The book benefits enormously from its whimsical tone, one that gives the story and characterisation a nice lift and also soaks through the wonderfully simple but evocative art and design. There's a sense of Boom's successful all-ages book Lumberjanes in the air that suits the material well and gives it a fresh and hugely entertaining new angle.

This is a book that is playing with genre stereotypes, but it does so energetically and knowingly. It's the latter that makes the difference. It also benefits from a great protagonist in Luvander, whose spiky, cynical wit is already establishing her as a great character. The plot of this first issue perhaps falls just a little bit short of fully satisfying - it is a little too open and unresolved - but as a complete package this looks like another great Image title to watch. (4/5)

With his Supreme Court challenge resolved, and while being celebrated as New York's best new district attorney, Matt remains haunted by the fate of his former sidekick Blindspot - and winds up being summoned to China to help him get out of some fresh bout of trouble. It is a very welcome return to Blindspot's plight - last seen with his eyeballs removed by an insane Inhuman criminal artist - and is well paced and set up. The cliffhanger ending throws a lot of fun stuff into the mix for the next issue. This is a rock-solid issue of Daredevil. (4/5)

Khyber crystal in hand, Darth Vader returns to Mustafar to build his own Sith lightsaber. In terms of pacing, tone and particularly Giuseppe Camuncoli and Cam Smith's artwork, Darth Vader #5 is onto an absolute winner. In terms of purpose, I think it's a lot less clear. This five-issue arc has essentially told the story of "Vader's first adventure", and I'm honestly not convinced this was a story we needed to read. The previous volume of Darth Vader filled in back story, of course, but it was simply tracking a path from Vader letting the Death Star be destroyed to Vader being in command of Palpatine's flagship. It felt illuminating but not essential. This by contrast seems such a core part of Vader's story that it feels wrong to develop it. I think I preferred not knowing. (4/5)

Ingrid's flagrant advantage-taking of the share house puts Susan and Esther over the edge. At the same time, a secret romance makes life difficult for both of them. Giant Days always straddles the line between soap opera and comedy, and it's natural that some issues are going to lean more in one direction than the other. This is definitely the soapiest issue of the title to date, focusing closely on developing two romances and a friendship into new directions. It's engaging if you are invested in the characters, but nowhere close to recommendable if you are not. (3/5)

Oliver Queen's cross-country quest to disrupt the Ninth Circle - and to team up with various superheroes on the way - hits a trip into orbit to destroy a Ninth Circle satellite. That means teaming up with Green Lantern, bringing one of DC's most enduring friendships back into the universe. There's clearly some unseen back story going on here, because they begin the issue on less than the greatest of terms, but the spark is there and the dialogue is great. Otto Schmidt's artwork presents some sharp and distinctive action. (4/5)

This is just the weirdest series. A comic book ostensibly about an obscure early 1980s Atari game, it has taken the weird route of not adapting the game's own narrative but instead to create its own contemporary story in which the real-life game is a key part of the plot. It's wry, well characterised and occasionally very surprising in the most entertaining of ways. I particularly like Ghostwriter X's gritty, realistic artwork, which has been nicely enhanced by colourist Chris O'Halloran. This is one of the more unusual books I have read this year, but that is part of why I am enjoying it so much. (4/5)
Posted by Grant at 8:00 AM