Star Trek: The Next Generation: "Force of Nature" 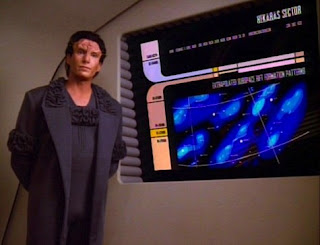 It is 15 November 1993, and time for another episode of Star Trek: The Next Generation.

While the Enterprise is tracking a missing Starfleet vessel, the ship is brought to a standstill by the sabotage of a brother-and-sister team whose research suggests that warp travel may be fundamentally damaging space.

You can see the intent behind "Force of Nature", and it is a fairly noble one. Star Trek has always run a fairly strong line in social commentary, thinly veiled behind a science fiction cover. Here the series tries to take a look at environmental issues, but manages to fall flat on its face. Not only is the story relatively trite and dull, it is oddly short. That leaves an awful lot of time to be filled with a fairly silly and inconsequential B-plot.

La Forge (LeVar Burton) has borrowed Data's cat Spot, and has found the cat to be generally uncontrollable and hostile. He suggests Data (Brent Spiner) try to train Spot, and so much of the subsequent episode gets filled out with Data's failure to train a cat. It's a weird analogy to draw between trying and failure to train a cat and trying to stop warp drives from harming the environment. If there was an intentional parallel drawn I am not sure what it was supposed to be.

Spot's a weird cat too. There's already been a change in breed of cat, and now somehow he has swapped gender and will present as female for the rest of the series. No comment is ever made on the change - did the writers simply lose track? - but it opens up some remarkably disturbing possibilities. Does Data keep accidentally killing Spot? Is the cat the victim of some never-seen adventure where some unexplained phenomenon mutated her?

What little there is of the episode's A-plot is dull and flatly developed. The Enterprise goes looking for a missing starship and stumbles upon a Ferengi vessel, giving the regular cast another periodic excuse to be jaw-droppingly racist towards the Ferengi captain. Then the Enterprise is invaded by two alien scientists who deliver a lecture on how warp drives are tearing open the fabric of space. Starfleet Command receives the data and immediately enforces a warp 5 limit on all of their vessels. Then the episode ends.

The warp 5 limit is a remarkably silly addition to the series. It gets mentioned two or three more times in The Next Generation, but gets all but ignored in Deep Space Nine and Voyager. In a series that struggles to sustain lengthy arcs beyond each episode, it feels a strange development to try and enforce. It, and the episode itself, is a waste of time. With only four good episodes out of nine so far this season, the quality ratio drops to 44 per cent.
Posted by Grant at 9:19 AM