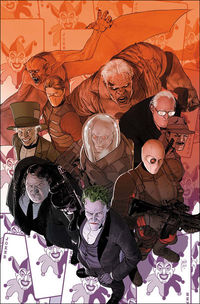 An unexpected ally helps Batman bring the "War of Jokes and Riddles" to a climax, in this presumably penultimate instalment of Tom King and Mikel Janin's current Batman epic.

It certainly feels climactic, with a few nicely played twists and turns, a very strong sense of 'ramping up', and some absolutely stunning artwork by Janin. The large cast of supporting players also helps to amp up the epic sense of scale.

That said, a continuing issue in this arc has been writer Tom King's tendency to tell the reader how devastating and violent the war has been, rather than actually showcasing it properly on the page. It has weakened everything slightly, and more than anything else is responsible from drawing the work back from 'future classic' to merely 'very good'. This all feels like it had the scope to be a major long-running arc along the lines of the big crossover events of the 1990s: "Knightfall", "Cataclysm", "No Man's Land", what-have-you. Despite being hugely enjoyable it's feeling like a missed opportunity at the same time. (4/5)

Under the cut: reviews of Aquaman, Batwoman, Poe Dameron and Spider-Men II.

Mera and Garth try to break open the magical shield that is isolating Atlantis, while down below Arthur and Dolphin are on the run from a criminal gang keen to curry favour with King Rath. This issue combines strong action, solid dialogue, absolutely gorgeous artwork and pushes the story arc another step towards its climax. This is the best Aquaman run in a long while, and best of all it's setting up the book for a potentially great long-term future as well; not in the least in terms of all of the new supporting characters and villains that are being created here. (4/5)

Once again Batwoman produces an issue with solid artwork, a great setting - Batwoman lost in the Sahara desert - and a fairly strong script, and despite its merits there is something about it all that just feels a little bit flat and ordinary. It is difficult to articulate: this is a good comic book, but for some reason that never quite translates into being an interesting comic book. A lot of it comes down to characters: other than Kate herself, no one in the series ever seems to really feel distinctive or stand out in a major way. (3/5)

The Black Squadron is separated and captured by the First Order, with the situation looking pretty grim for everybody involved. Obviously they're going to get out of trouble, but how it all pulls together makes for a really entertaining issue. Angel Unzueta's artwork is strong, and Charles Soule manages to throw in more than a few satisfying pay-offs. It does feel like this comic could tie itself and end fairly soon, and with it firing on all cylinders at this point it'd be nice to see it conclude on a high. (4/5)

After two issues teasing the existence of a second, original Marvel Universe Miles Morales, issue #3 of Spider-Men II unexpectedly gives us his entire origin and back story. Will some readers be annoyed at an entire issue of Spider-Men without any Spider-Men in it? Perhaps, but in return they get a crime drama about the Kingpin's early career alongside the mysterious Morales. It's a great segue, one that delivers not only a great short story in itself but also fleshes out this miniseries' antagonist so perfectly that the remaining two issues are free to focus on his encounter with the Ultimate Miles and Peter Parker. (5/5)