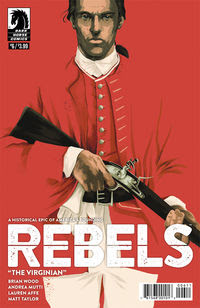 With Seth Abbott's story winding to a close, and with three more issues left to go, Brian Wood's historical comic Rebels now shifts over to a trio of self-contained short stories. These short works often present Wood at his very best - as seen not only the previous volume of Rebels but also the likes of The Massive and Northlanders.

This issue does not disappoint. It focuses on a young George Washington leading a group of soldiers on a reconnaissance mission. When he stumbles upon an English fort that has been taken by the French, he disobeys orders and decides to retake it by force.

The George Washington presented here is not the noble founder of the United States that we usually see. Here we see an arrogant young military leader with a poor respect for command, a lack of interest in his men's safety, and a casual disregard to any arrangement or promise made to indigenous peoples in the Virginia area. Andrea Mutti's artwork is beautifully composed and illustrated, but it is Lauren Affe's colours that richly bring the story to life.

As a one-short story you can easily just pick up this issue and ignore the rest of the series. It's well worth the purchase, and hopefully may drive some more readers to Rebels and offer Dark Horse a chance to keep its richly textured historical stories going. (5/5)

Under the cut: reviews of All-Star Batman, Ghostbusters 101 and Rapture.

"The First Ally" heads towards its climax as Batman and Alfred battle on the present, while Alfred's covert operations back story plays out in flashbacks. The two feels very well integrated in this issue, but the lingering question remains over whether all of this new information on Alfred's past actually works. For me it does not, and perversely weakens the character by making him an experience tactitian and military officer. It seemed so much more impressive when he was just the world's most versatile butler. Rafael Albuquerque's artwork is, as always sensational however, and very nicely coloured by Cris Peter. I particularly love the neon-lit cover. (3/5)

IDW's big crossover between the 1984 and 2016 Ghostbusters casts reaches a climax as the two teams work together to seal up the rift that has brought both of their respective universes together. It's amiable, entertaining stuff, right up the alley of franchise fans but still solid enough to be an enjoyable read to a more casual audience. I do really like Dan Schoening's art and designs, which really push an animated look that would actually work really well if Sony wanted to bring back a Ghostbusters cartoon. (3/5)

As Babel tries to break through from Deadside to the living world, Ninjak, Shadowman, Tama and Punk Mambo are the last line of defence to save Earth from total devastation. It's a neat conclusion that winds up incorporating some very unexpected and well devised character development for Shadowman. There's also a nice bit of foreshadowing, punting a few elements down the road for a future miniseries to pick up. I've rather enjoyed this four-part series: it wasn't ground-breaking, or mind-blowing, but was consistently entertaining. (3/5)
Posted by Grant at 10:50 PM