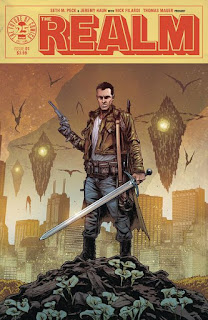 Nolan is a mercenary working in a post-apocalyptic United States. After one contract ends in bloodshed, Nolan picks up another: escorting four scientists across the country and ensuring they don't get murdered or eaten along the way.

The Realm is a standard kind of post-apocalyptic adventure with one key twist: while the circumstances remain unexplained, the marauding hordes threatening humanity are not zombies for once but rather fantasy animals. It is as if a Dungeons & Dragons Monster Manual has been unleashed upon the Earth, spilling out orcs, drakes, dragons and who knows what else. It is a neat change that helps lift an otherwise very predictable storyline. I suspect how future issues explore and expand this fantasy setting will dictate the long-term quality of the book.

Also lifting the book's game is Jeremy Haun's extremely detailed and boldly inked artwork. It gives the book a level of style and prestige that does paper over the story weaknesses quite a bit. (3/5)

Under the cut: reviews of Batgirl and the Birds of Prey, Ms Marvel, Ninjak and Sacred Creatures.

Batgirl and the Birds of Prey #14

This latest issue of Batgirl and the Birds of Prey feels a little weak. I somehow missed that the current continuity version of the Huntress is a school teacher by day, which made her class excursion - Dinah Lance in tow - a weirdly disruptive surprise. Meanwhile Batgirl fights crime in Gotham in their absence with the help of Catwoman and Poison Ivy. The lightweight tone of the issue kind of kills it for me. There's a little too much that happens that doesn't seem to have any sort of dramatic weight. As a result it's a bit like a child gushingly telling you the story rather than reading it for yourself. This book has been a lot better than this recently; I'm not sure why it's stumbled so badly. (2/5)

New Jersey has been taken over by a new Mayor, secretly loyal to Hydra, and he has instituted punitive new regulations on Inhumans and other super-powered individuals. Now Kamala, in fighting back, has unmasked a key henchman as one of her friends from high school. There's a very well expressed ambivalence in this issue, in which two friends find themselves in ideologically opposed positions and simply have to find a way to cope with that. Meanwhile the people take to the streets in a very upbeat and inspiring resistance. Marco Failla's artwork has just seamlessly continued the work of Nico Leon and Takeshi Miyazawa; I can't think of another superhero title that has been this visually consistent across multiple artists. It makes a huge difference. (4/5)

After three years, Matt Kindt's tenure writing Ninjak comes to an end with a special #0 issue and a prologue for next month's new Ninja-K reboot. I have never really liked Ninjak as a character - the idea of a white British secret service agent who is also a ninja never sat right with me, and never seemed particularly convincing or interesting. This final issue, however, is at least inventively composed. The present and the past are played out side-by-side, with Francis Portella handling the current events and a range of Valiant artists contributing to the various flashbacks. I still don't particularly care for the character, but this is a wonderfully clever and engaging issue that sends the Kindt run off in style. (4/5)

The Seven Deadly Sins, personified in human bodies, have been imprisoned on the Earth for 5,000 years. Now that they have been freed it is down to 24 year-old Josh Miller and the mysterious and angelic Adrian to stop them from laying waste to the planet. The longer page count per issue certainly provides a lot more story than the average comic book, but it appears to be coming with a cost. A few too many backgrounds in this issue are not just photo-referenced but actual photographs, giving some scenes a weirdly artificial and visually distracting feel. It seems the price to pay for both the length and Raimondi's very realisitc and detailed artwork. The story is a little bit stereotypical, but it's well expressed and well-paced. (3/5)