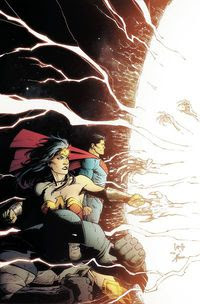 It is a work that ties up plot strands that run back nine years to the climax of Grant Morrison's Final Crisis, and picks up elements from Scott Snyder's multi-year run on Batman along the way. It is essentially tailor-made for DC's hardcore fan base; I honestly don't know whether the casual reader will get confused by the various references and cameos or simply gloss over them. As one of the hardcore, I was delighted.

Snyder is really employing an 'everything but the kitchen sink' approach, providing superhero action and team-ups, surprise cameos and continuity reference, inter-dimensional horror, and numerous twists and turns. The sudden appearance of The Sandman's Dream at the end of issue #1 is almost hand-waved away here. It's a smart approach that softens the jarring effect that it had then, but still opening the character up to return later in the series.

It's all wrapped up in Greg Capullo and Jonathan Glapion's fabulous artwork, that is just exaggerated enough and just detailed enough to hit that perfect superhero comic sweet spot. Metal isn't going to be for everyone, but for those for whom it is for, it's pretty much perfection. (5/5)

Under the cut: reviews of Action Comics, Detective Comics, and Teen Titans.

After about two years of build-up, the identity of the mysterious Mr Oz is revealed. While I'm not going to spoil the reveal here, I am going to claim it's a fake-out. It just feels much too sudden a moment and risky a plot development to hold water for me. The build-up over the course of this issue is pretty strong, however, as is Superman's anguish when presented with a mass murder that he was unable to avert. How good this storyline ultimately becomes is really down to how it progresses from here: I'm not overly impressed with the cliffhanger here, so hopefully a few shocks and twists will swing it towards something better. (3/5)

Stephanie Brown is sucked into the possibilities of Anarky's underground refugee city beneath Gotham, and is reunited with some old friends. Clayface struggles with his search to find a cure for his condition. Then Batman turns up and what feels like should be a trade-length storyline is suddenly truncated and concluded, with some teases for the return of the Victim Syndicate. If feels like sloppy storytelling, pushing a story out of the way in order to meet the requirements of a broader plot - or possibly DC's own over-arching Rebirth saga. Either way, this issue is a rushed disappointment. (2/5)

With Dark Nights: Metal now two issues in, it's time for DC Comics to embrace the dreaded phenomenon of tie-in issues. "Gotham Resistance" ties together Teen Titans, Green Arrow, Nightwing and Suicide Squad as a disparate group of heroes fight their way towards a magical mountain that has erupted in the centre of Gotham City. My standard dissatisfaction with event tie-ins aside, this is actually a pretty entertaining mash-up of heroes teamed up to get their way through an enormous maze controlled by the Riddler. Benjamin Percy's script is great; I'm a little less fond of Mirka Andolfo's artwork, but it's certainly nowhere close to a deal breaker. Try to read it after Metal #2, but even if you don't there's a mad little fantasy adventure going on here that's definitely worth the purchase. (3/5)