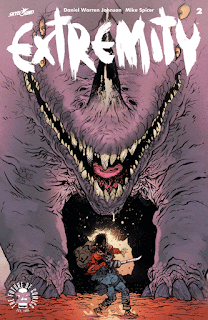 Thea continues her quest for vengeance against the Paznina war lords. In the wreckage of the rising plains, she discovers a new ally for her mission.

There is a certain kind of bleak, desolate science fiction/fantasy that particularly appeals to me in comic book form. It can be found all through the works of Moebius, and more recently in American comic books in the likes of The Spire, Prophet, Wild Blue Yonder and Planetoid. You can add to that list Extremity, a vivid and richly developed saga about a one-handed girl on a mission for revenge among the shattered remnants of her home lands.

Creator Daniel Warren Johnson has developed an intriguing and dramatic fantasy world in which Thea seeks her vengeance, and his detailed, distinctive artwork really draws the reader into that world. Colourist Mike Spicer is particularly good in this issue, making a sharp visual distinction between flashback and present events as well as the various locations revealed. For fans of speculative fiction, this book is definitely worth checking out; personally, I'm hooked. (5/5)

Under the cut: reviews of Aquaman, Batman, Eleanor and the Egret, Giant Days, Green Arrow, Spider-Man and Superman.

Aquaman and Mera have teamed up with a team of augmented US marines to track down and capture the mysterious ocean-borne killer known as Dead Water. There is a certain element of Aliens to this story arc, which satisfies generally without ever actually excelling itself. Dan Abnett's run on Aquaman started off very strong, but it does feel as if recent issues have been relatively stagnant by comparison. This isn't a bad comic, but there are certainly plenty of more inventive ones. (3/5)

"I Am Bane" reaches it's brutal, violent climax - and yet there has been something oddly poetic about the whole thing. It has a complex structure of flashbacks and overlapping pieces of narration, and a pretty huge sense of monentum - following as it does the "I Am Gotham" and "I Am Suicide" story arcs. I have not warmed to David Finch's art the way I did to his predecessor Greg Capullo, but it's effective and muscular and does match the tone of the book well. (4/5)

Eleanor and the Egret #1

A detective investigates the theft of a priceless masterpiece painting, unaware how close he is coming to the young woman who stole it - with the help of a deceptive egret. Eleanor and the Egret feels like a particularly odd project, one that comes from Chew creator and writer John Layman and The Maxx creator and artist Sam Keith. There is a certain charm to the book, but at the same time a sort of strange awkwardness to it as well. I was intrigued, but I'm not entire sure I was engaged. (3/5)

A Christmas-time sojourn home expands significantly on Susan Ptolemy's family, included the introduction of her mother and six older sisters. This continues to be a great comic book, combining strong humour with a gentle human edge, but this issue in particular feels even more effective and charming. It's an extra-length comic to celebrate its 25-issue anniversary, and that gives the story that much more room to expand and explore. I never see anybody talking that much about Giant Days, and that makes me feel it may be one of the most underrated comic books on the market. It's an adorable work. (5/5)

"The Return of Roy Harper" concludes, and return he does in a back-and-forth storyline that reflects between his and Ollie's current battle against Ollie's former company as well as the confrontation (and drug addictions) that originally forced them apart. It doesn't quite gel together. The individual scenes are fine, and Percy continues to demonstrate a strong handle on the characters, but it feels like a much stronger balance and interplay between the two timelines could have resulted in a stronger storyline. Carlini and Andolfo's artwork is a solid match for the book's general aesthetic, and benefits from Prianto's fairly detailed colouring. (3/5)

"Black Dawn" kicks off with the Kent farm receiving a visit from Batman and Robin. It seems Jonathan's super powers are being constrained in some fashion, and Batman's investigation into why leads him to a supernatural evil right on the Kents' doorstep. Like Aquaman, this issue of Superman feels like a solid mid-range effort without anything that actively leaps out and makes an impact. Batman also seems a little off: a little too formal and stand-offish with Clark, and a tad too grim even by Batman standards. (3/5)
Posted by Grant at 11:13 PM