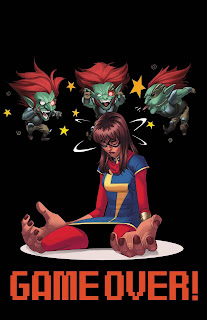 Ms Marvel makes her final stand against the sentient computer virus Doc.X, although winning the day may require achieving the impossible.

It is always worth regularly highlighting the month-to-month strength of Ms Marvel, which for a couple of years now has pretty much been Marvel's most consistently enjoyable and 'on-message' comic book. What I mean by that is that I think there is a central conceit to the Marvel Universe, one that focuses on superheroic character who continue to suffer real-world issues and problems: self-esteem, fighting with friends, ill-fated romance, or even something as simple as passing high school exams or getting ahead in a day job. Ms Marvel is one of the best books at addressing real teenage issues through a super-powered lens, and in the hands of writer G. Willow Wilson the book does it damn-near faultlessly while also being consistently and brightly socially progressive.

Takeshi Miyazawa's artwork is wonderfully exaggerated and emotive as always, and Ian Herring's surprisingly subtle colours really help to give it all depth and tone. Long may the book continue. (4/5)

Under the cut: reviews of Descender, Doctor Strange, Doctor Who: The 11th Doctor, Green Arrow and Highlander: The American Dream.

A triple-climax comes to a head as Tim-22 takes over the starship from Quon and Telsa, Tim-21 helplesses watches a robot army prepare for war, and Andy and the Scrappers make a desperate jump to rescue Tim-21 from captivity. The slow build-up of early issues pays off here with a fast-paced issue that brings everything to a crisis point before throwing it all into the air for an impending five-part weekly storyline titled "Rise of the Robots". It's a pretty enticing set-up for such an arc; I just hope the momentum keeps pushing on. (4/5)

Stephen Strange challenges Mister Misery for the life of his assistant Wong. This is a good conclusion to the story, and allows Jason Aaron to dive fully into the history and friendship between the characters - taking time, in particular, to note just how superficially their relationship has been portrayed in the past. Bachalo and his army of inkers still struggle to make the book look as coherent and attractive as it could, but to their credit the story makes sense and is at least readable. I can't deny I'm looking forward to a change in creative team in two issues' time: I will miss Aaron's scripts, but really want to see a nicer take on the pictures. (3/5)

Some unknown force has transformed the time on planet Earth into space, resulting in multiple years all living adjacent to one another. The Doctor is on the case to put things right, and that means challenging whatever alien menace lives in 1968. This is a rather smart, slightly silly adventure that really pushes the 'timey-wimey' side of Matt Smith's tenure as the Doctor. In all honesty I've been finding this year's run of the 11th Doctor comic a little bit weak. This issue felt like a strong return to form. (4/5)

Oliver Queen has lost control of his business empire. Green Arrow has been framed for murder. Now the Ninth Circle, the elusive criminal organisation responsible for both, has its eyes on bringing the city of Seattle to its knees. This is a tremendous prologue to "The Rise of Star City", one that boasts Juan Ferreyra's rich, colourful artwork as well as Benjamin Percy's well-paced and characterised script. The panel layout is wonderful, splitting the two story threads horizontally across the page: the top half for Ollie, the bottom for his enemies. (5/5)

Connor Macleod and the immortal monk Vazilek reunite in 1955 New York when John Hooke returns with more murder on his mind. This is an excellently written Highlander spin-off, one which captures the tone of the original film while telling a fresh and distinctive style of story. I am also hugely impressed by Andrea Mutti's artwork, which gives the whole book a sort of late-1980s DC Comics look. Altogether it's a lovely piece of spin-offery. (4/5)
Posted by Grant at 4:38 PM