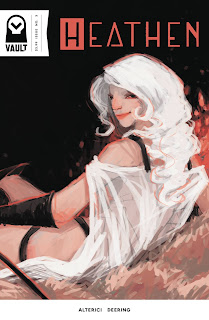 The young viking woman Aydis has succeeded in freeing the goddess Brynhild from captivity, but has been captured and kidnapped by Freya and the Valkyries for her trouble.

There is a remarkable quality to Natasha Alterici's miniseries that is quite difficult to pin down. It skirts the edge of becoming an all-out sex-filled work of erotica - particularly in this issue, which reveals a Valhalla packed with scantily-clad lesbians - yet Alterici always pulls the book back to focus on characters and story, and a rich heartfelt tone of hope. The artwork is wonderfully subtle and almost gentle in style.

Perhaps best of all is just how distinctive and unique the book seems to be. It has an enormously strong identity and style that has made it stand out against all of the other comics I have been reading this year. When the time comes to consider the year's best books, Heathen is already a top contender. (5/5)

Under the cut: reviews of Action Comics, Batgirl and the Birds of Prey, Copperhead and Detective Comics.

While Superman struggles to reconcile his new past - the result of "Superman Reborn" - an unseen enemy begins assembling a super-villain team to destroy him. It's a weird sort of issue, one that spends an inordinate amount of time re-telling Superman's backstory all over again in a compressed and superficial style. This fresh story arc, "The New World", might develop into something more interesting but for now it's actually rather dull. (2/5)

Batgirl and the Birds of Prey #9

Black Canary is undercover in Blackbird's secret metahuman fighting ring, but when she wins enough rounds to join Blackbird's training school the real plot is revealed. Batgirl and the Birds of Prey continues to deliver solid, hugely enjoyable superhero adventure. The Bensons' script is entertaining and well characterised, and Roge Antonio's artwork is slick and effective. This feels like a very old-fashioned sort of DC book, with guest appearances by other heroes dropping in and out and a nice sense of a combined fictional universe. (4/5)

The mayor has been assassinated. Clara's deputy Boo has taken over the mayor's position. An ex-lover has arrived in town to make trouble, and to warn her that her criminal ex-husband may be on his way to see her. It's a powder-keg set to blow, and part of the satisfaction is waiting to see what is going to be the specific last straw to bring Clara's life crashing down around her. New artist Drew Moss has dropped into the series comfortably; despite the change this feels like the same book through and through. (4/5)

Batman is confronted by Ra's al Ghul in the Batcave, while Lady Shiva's rampage across Gotham City continues. There are a lot of elements in the air for this "League of Shadows" arc, and it's testament to James Tynion's growing skills as a writer that he can keep them all moving without the whole storyline collapsing in a heap. The book also features a fairly high panel count on each page, allowing the story to move at a fairly quick pace and cover a lot of group in each issue. The art and colours feel a little muddy, which does pull the book back a little, but this is a gripping and effective little epic. (4/5)
Posted by Grant at 8:51 AM