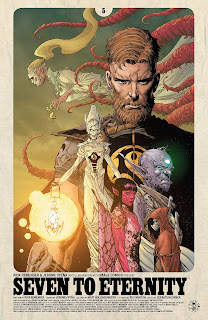 Seven to Eternity is back for its fifth issue, following a brief hiatus and the release of its first trade paperback. I really appreciate the Image release schedule, first employed on Saga: a string of single issues, then a collected edition for other readers to catch up, then a few more single issues, and so on. It's a strategy I'd actually be happy to see the 'big two' employ on at least a few of their books.

The issue picks up right where the fourth left off: Adam Osidis, slowly dying from an incurable sickness, travels across the wilderness with the Mosak Knights along with their prisoner - the tyrannical Mud King. They are intercepted by one of the Mud King's warriors, leading to a fierce battle and an emergency change of plans. You can probably tell from the names that this is a high fantasy saga, but the synopsis and the names fail to express the book's key strengths.

Rick Remender has developed a great range of characters with depth, regrets and grit. It is a much bleaker and more desolate fantasy world than the typical literary fantasy, edging almost into the post-apocalyptic milieu. Jerome Opeña's artwork is, quite frankly, jaw-dropping. There is a beauty and an attention to detail that most other contemporary comic books cannot match. Each issue to date has been an absolute feast for the eyes, and it is easily one of the book's strongest selling points. Matt Hollingsworth's colours accentuate the work rather than over-power it. Altogether it's a hugely attractive package. (4/5)

Under the cut: Rat Queens, Silver Surfer and The Wicked + the Divine.

Rat Queens is back in action, with the Queens taking on a giant dragon-like monster before getting drunk in a bar and raiding a graveyard. The tone that made the series such a delight in its earlier arcs is back, and new artist Owen Gieni really establishes his own distinctive aesthetic. It is always great to see a book that was faltering and stumbling into a heap manage to right itself and get back to doing what it does best. With any luck Weibe can hold onto Gieni a little longer than he managed to secure the earlier artists, and Rat Queens can enjoy a sustained, entertaining run. (4/5)

Silver Surfer walks a tightrope under writer Dan Slott. He has successfully zeroed in on a distinctive and often-times hugely effective style for the character, combining the whimsical and gushingly romantic sci-fi adventure of Tennant-era Doctor Who with the pop art sensibilities of artists Michael and Laura Allred. When done well the book is an absolute delight, but all it takes is a minor misstep and the book can feel simplistic, naive and a bit of a waste of time. That is sort of what happens this issue: by doing a favour to a re-imagined Galactus, the Surfer and his companion Dawn are separated on other sides of the universe with no chance of ever seeing each other again - for about a page, and then everything is okay again. It feels trite and weirdly vacuous. This book has done much, much better in the past. (2/5)

The stability of the Pantheon is going wildly out of control in this climactic issue. The Great Darkness is still coming, no one seems agreed on what to do about it, and a string of revelations and plot developments push the situation from bad to worse. Fame and power has corrupted the cast, and now rather than saving the world they may be spearheading efforts to end it. Great dialogue abounds as always, and Jamie McKelvie seems particularly on fire this month. Matthew Wilson's colours are bold and hugely effective. One of the best parts of this comic is that I honestly could not tell you where Gillen is going with the story. It's great to read every month, and right now it feels like the roller coaster is about to hit one of the particularly panicky bits. (5/5)
Posted by Grant at 9:30 AM