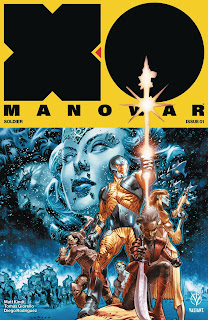 Every ongoing comic book needs jumping-on points for the new readers, and whether the pre-existing fans like it or not the most obvious way to provide one is to re-start a serialised comic from a new issue #1. Valiant in particular use this technique on all of their books, with few titles extending far between twenty issues or so without getting revamped, renumbered and relaunched. This month it has been the turn of X-O Manowar, which begins anew with a script by Matt Kindt and Tomas Giorello.

To their credit it really does feel like a fresh book. Aric, the Roman gladiator who bonded with an alien suit of armour, now lives in a distant planet as a farmer with one hand missing and his iconic armour buried in the ground. When the military come conscripting cannon fodder, he is dragged away and forced to fight whether he wishes to or not.

Tomas Giorello's artwork absolutely sells this book. It looks fantastic, with a rich visual blend of science fiction and fantasy elements and a huge amount of tecture and depth. For new readers it is an easy book into which to jump: people often ask me which Valiant books to read, and this month you should absolutely be reading X-O Manowar. (5/5)

Under the cut: reviews of Bloodshot Reborn, Helena Crash and Star Trek/Green Lantern.

Like XO Manowar, Bloodshot is getting a relaunch too, one that is foreshadowed by this 'zero issue', which wraps up some details for the climax of the last volume while setting the stage for a fresh story arc. It is nicely written and illustrated, and Andrew Dalhouse's colours are great as always, but to be honest this is an issue for the pre-existing readers to hook them over to the new run. For everybody else there's nothing for a new reader to latch onto; it's all basically inside baseball. (3/5)

There is an immediately striking art style to Helena Crash, with Warwick Johnson Caldwell giving everything a very primitive, scribbled-down look. It's highly kinetic, using a loose non-realist style to represent the speed and energy of the car chases and fist fights. Fabian Rangel Jr's script is creative and amusing, showcasing a post-climate change future where commonplace items like coffee are now illegal and weird aliens and mutants can be seen on every city street. I think IDW is at its best with these more overtly creative works: it's the kind of book that makes their vast array of money-raising tie-in books seem worth publishing - if it means they can also publish books like Helena Crash. (4/5)

Khan Noonien Singh has control of a red power ring, using it to battle the Enterprise again. Meanwhile Sinestro has reached the Oa of the Star Trek universe. The first crossover miniseries between Star Trek and Green Lantern was passably entertaining in a silly 'what if?' fashion. This second series is just hideous over-the-top fan pornography, focused more on shoe-horning in characters than in telling an entertaining story. It's just a terrible waste of everybody's time: the creatives, the IDW editors, the readership. No one benefits from this book. (1/5)