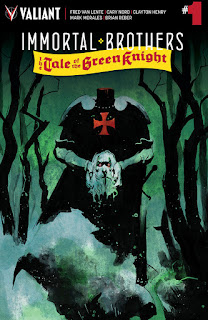 One of the best things about Valiant as a superhero universe is the hugely inventive manner in which they re-position and re-develop their characters. For one thing their character roster includes three immortal brothers: Gilad, of Eternal Warrior fame, Armstrong, from Archer & Armstrong, and Ivar, star of Ivar Timewalker. Now in a new one-shot all three brothers stand together, not only in Europe's Dark Ages but the court of King Arthur of Britain in Immortal Brothers: The Green Knight.

It's a smart, funny retelling of the classic myth with a good mixture of comedy and drama. It is framed by fellow Valiant hero Archer reading a story to a bedridden and sick Faith, and does a solid job of wrapping an old story around the new characters. More impressive than the story is the artwork, which is simple but hugely effective and beautifully proportioned. Brian Reber's bold colouring also helps to bring the book to life.

In the end this really is just a small piece of whimsy, but I like that Valiant offers the freedom to tell these kinds of amusing side-stories. I can see a number of these Immortal Brothers one-shots developing in the future. (4/5)

Under the cut: reviews of Invader Zim, Justice League of America, and Motor Crush.

I don't often write reviews of Oni's Invader Zim comic book, because to be honest there is very little to write about each month. It's a serviceable copy of the popular TV cartoon, written by series co-writer Eric Trueheart and with art by Warren Wucinich that generally copies the look of creator and artist Jhonen Vasquez. If you liked the cartoon and want a breezy, easy-to-read tribute, it solidly does the job. This issue, which sees Zim unseating a burrito store owner to become Burrito King and impress the Almighty Tallests, is a fairly good issue but at the end of the day this book is what it is. (3/5)

It's time for the final showdown between Batman and Lord Havok for the fate of a failed Eastern European state, and they have both brought teams of metahumans to back up their plans. Like the rest of this first story arc, issue #4 is an entertaining diversion with pretty strong artwork and colours, however it never feels more than competent. It's a trend I'm seeing in a lot of DC books this month: stories that are 'good enough', but none of which seem to be pushing any boundaries or trying anything new. The renewed energy that came from DC Rebirth seems to be fading away to an extent, leaving everything good but not necessarily great. (3/5)

This fifth issue forms the conclusion of the first volume of Motor Crush, so give it a month or so and there will probably be a collected paperback enabling you to catch up. It's worth doing so: this is an energetic near-future science fiction story. While this finale provides quite a few answers to protagonist Domino's life and back story, they are honestly not the ones that I expected - and that is brilliant to read. What seemed to be a sort of cyberpunk street racing melodrama has turned out to be something a lot weirder. (4/5)
Posted by Grant at 10:36 AM