Star Trek: The Next Generation: "The Battle" 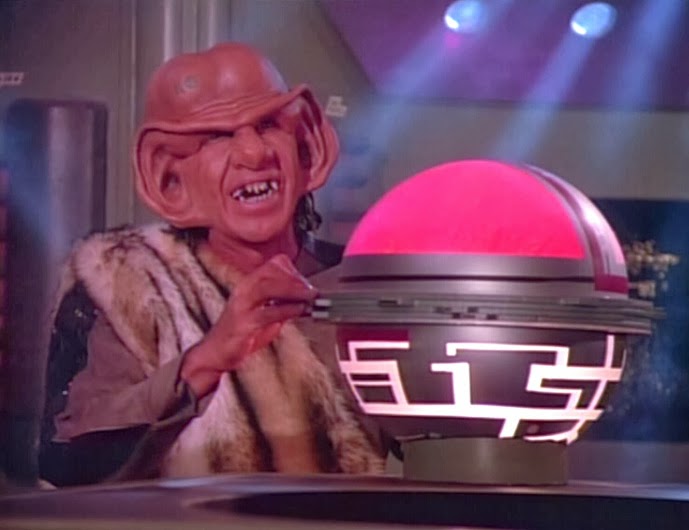 The Ferengi are back! Everyone's least favourite new alien species return, because despite not remotely working the first time around the production team are going to flog this horse until it's a pile of bones. Looking ahead, it will take Armin Shimerman's rounded three-dimensional performance as Quark in Star Trek: Deep Space Nine before the Ferengi are watchable again - until then (more than five seasons from now), we have to cope with what we're given.

The Enterprise makes a rendezvous with a Ferengi starship when its captain, Daimon Bok, claims he has a gift for Captain Picard. It is the USS Stargazer, Picard's first command, presumed lost when it was attacked by an unknown assailant nine years earlier. When Data examines the Stargazer's log, however, it tells a very different story to the one Picard told on the record - and why is the captain suddenly plagued by headaches?

There's a very silly scene at the beginning of this episode where Dr Crusher remarks surprise at Picard suffering from something as old and long-cured as a headache. This is ridiculous: headaches happen for all manner of reasons, and unless future physicians have cured everything then headaches will still be commonplace: they're a symptom, not a disease.

As for the meat of the episode, Picard's headaches grow as he slowly comes under the influence of Daimon Bok's mysterious mind control machine. It's all an act of revenge for Picard destroying the mystery vessel nine years ago - a vessel commanded by Bok's son. It's actually a pretty good concept for an episode, and the use of Picard's old command gives the series an opportunity to properly delve into his past. Patrick Stewart gives a very strong performance in this episode, and it's clear the writers have established who the series' best actor is since they're writing for him so consistently now.

If there's a problem, it's that the episode only works if the Enterprise crew act with extreme credulity. A captain from an enemy civilization turns up on your doorstep, offering you a free gift when you know that his species values commerce and profit above all else, and you simply accept it? A mind control device gets accidentally shipped onboard the Enterprise because no one thought to run a security scan over the captain's possessions? At its worst, stuff like this can break an episode. Here, thankfully, it's more of an annoyance.

This is a patchy episode, but one made watchable by Patrick Stewart's acting. So that's three enjoyable (sort of) episodes out of eight, or 38%.
Posted by Grant at 9:18 AM