Star Trek: The Next Generation: "The Naked Now" 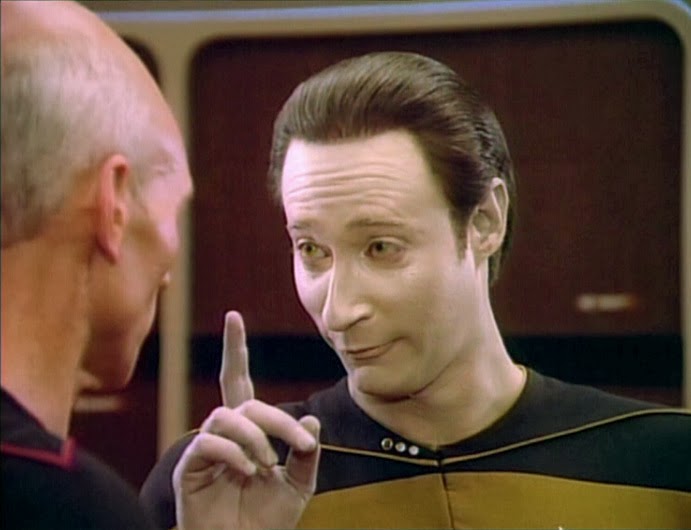 The pilot episode of Star Trek: The Next Generation introduced the all-new USS Enterprise of the 24th century, its captain Jean-Luc Picard and its valiant crew: Riker, Data, Worf, Yar, Troi, Dr Crusher, La Forge and Dr Crusher's teenage child prodigy Wesley. It launched them off into new adventures that could go to places and situations never-before imagined during the three seasons of the original Star Trek back in the 1960s.

Except that, in their second episode, they go where someone has gone before. In this case, into a knowing retread of classic 60s episode "The Naked Time", in which a strange gravitational effect causes the crew to become dangerous intoxicated. Picard and Dr Crusher start flirting madly. Yar has sex with Commander Data. Wesley takes over the Enterprise. You read that right: the series has been on the air for one week and its writers have already found a way to make you want to slap Wesley Crusher out of the nearest airlock. It's maddening: Wil Wheaton is great. Why are they doing this to him?

This episode is a cock-up of staggering proportions. It is based entirely around the concept of the characters behaving strangely, except this is only the second episode. We simply haven't had time for this episode to make any sort of impact. So instead of beloved characters behaving weirdly, we instead watch what feels like a bunch of actors we half-recognise looking embarrassed. Very few of them pull it off. The rest, particularly Levar Burton, Denise Crosby and Brent Spiner, look mortified at what they're being forced to do. On the other hand, Patrick Stewart and Gates McFadden are genuinely funny, while Wil Wheaton does a great job of playing a drunk child who's never been intoxicated before - it's just a pity that they give him such stupid things to say and do.

It does not speak kindly to one's creativity if, as showrunner and executive producer, your first proper episode is a carbon copy of something you produced 20 years ago. Television has moved on a great deal between 1966 and 1987, but it's clear from the first two episodes that Roddenberry didn't move at all. This is painfully awkward, old-fashioned television.

Do note the ship's engineer MacDougal. She's only in the job for one episode and is never seen again. Even her replacement only turns up twice. It's one of the great untold stories of first season Next Generation: what happened on the ship to make its engineers quit with such frightening speed?

We're two episodes in, and neither episode has been good. This could be a long rewatch.
Posted by Grant at 9:11 AM