Doctor Who: "The Escape" 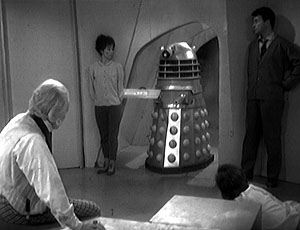 When we last saw the Doctor and his companions, Susan had just retrieved the vital anti-radiation medication from the TARDIS. In "The Escape", the third instalment of "The Daleks", she makes contact with Alydon and his people, the tall, Aryan-looking Thals, and relays their message of peace to the Daleks. When she, the Doctor, Ian and Barbara continue to be imprisoned by the Daleks, they conspire to escape.

The Daleks clearly captured the public imagination from the get-go, since an additional 2.5 million viewers tuned into this episode compared to "The Survivors" the week before. By the end of the serial in February 1964 Doctor Who was getting more than 10 million viewers a week - a far cry from the 4.4 million who tuned into "An Unearthly Child" in November 1963. It would be tempting to say that "Doctor Who had arrived at last", or some such hyperbole, but the truth is that at this stage the series still isn't really resembling the one that we've all been watching for the last 50-odd years.

The Daleks themselves are one of the strangest aspects. They don't really act like Daleks at all. Here they're ambivalent, mysterious and actively sneaky. A lot of this subtlety will get stripped away over the ensuing decades, and as someone who grew out watching genocidal Daleks shrieking "Exterminate!" at every opportunity they come off as slightly weird. I vastly prefer them here: I don't think they're ever this creepy again.

The creepiest moment comes when the Doctor and his friends manage to deactivate one of the Daleks as part of their escape. Ian unlocks the top of the casing, lifts it up and immediate stifles his horror at what's inside. It's only after he sends Barbara and Susan out of the room that he and the Doctor carefully wrap what's inside in a cloak and drop it in the corner of the room. During the last episode it would have been easy to take the Daleks for granted as some kind of robot or machine: it's only in this episode's final moments that we realise the Daleks are living, biological creatures.

The Thals, the only other living species left on the planet, come across as a bit tedious. Alydon (John Lee) is convincing enough, but once he's joined by the rest of his tribe it starts slipping badly into cliche.

The TARDIS team are on fine form here, with all four working in unison to escape from the Dalek prison cell. The only real issue with the scene is William Hartnell, who has a tendency to step on his castmates' lines and fluster a bit too much. This is a problem that will continue in the years ahead, but it's unfair to blame Hartnell for it as it's caused by encroaching arteriosclerosis rather than any lack of professionalism on his part.

While the Thals may be dull, the escape from the cell and the discovery of what's inside a Dalek are anything but. This is a great episode, giving Doctor Who's debut season six good episodes out of seven: that's a percentage score of 86%.
Posted by Grant at 9:37 AM