Doctor Who: "The Time of the Doctor" 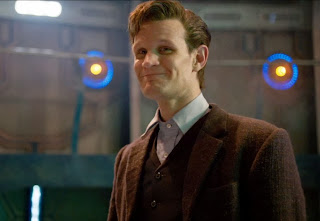 I have just returned from a week-long holiday in Sydney, during which time the BBC aired the Doctor Who Christmas special. "The Time of the Doctor" is a significant episode for the series. It marks the final appearance of Matt Smith's 11th Doctor, heralds the introduction of Peter Capaldi's 12th Doctor, ties up three seasons' worth of loose continuity strands and by coincidence also happens to be the 800th episode of Doctor Who ever broadcast.

A mysterious signal is being transmitted from an isolated planet. Every power-mongering civilization in the universe arrives out of fear, while the Doctor arrives out of curiosity. He finds a crack in the universe he thought he had left behind, a town named Christmas and a future he has been desperately hoping to avoid. On the planet Trenzalore, the Doctor's faces a 300 year-old siege that can only end in his death.

Going by some of the Internet reactions, you would think that "The Time of the Doctor" was a war crime: a hideous and senseless abuse of audience loyalty whose authors must be tarred and feathered and marched in shame down every high street in the developed world as an example to future generations of television script writers and producers to never produce such awful dross again. Thankfully it's possible to smile politely at those sorts of reactions, and maybe pat them on the head or ruffle their hair. The truth is that "The Time of the Doctor" is an enjoyable but flawed hour of TV drama. It's far from perfect, but then it's also remarkably good. By the standards of Doctor Who in general, I'd call it reasonable. By the generally haphazard standards of the Christmas specials, it's actually rather remarkable.

Structurally, the episode is a bit divisive: it's essentially a fairy tale, which ties in very nicely to the folkloric tones of Season 5 (Matt Smith's debut). There's a lot of narration where you might reasonably expect on-screen action. Now how you react to this style of television is going to dictate to a large degree how you react to "The Time of the Doctor" as a whole. Personally I really liked it. It gave Smith's final story a pleasant epic quality, particularly as he gets older and older defending Christmas from the waves of alien invaders.

I also appreciate how the episode picked up and resolved all of the plot threads hanging over from Seasons 5 and 6. Who blew up the TARDIS in Season 5 and why? You find out. Who are the Silence, and why do they want the Doctor dead? You find that out as well. What is the oldest question in the universe, and what happens if it's answered? It's all laid out in slightly sketchy, complicated form: imperfect, but so much better than what I was expecting. (To be honest I wasn't expecting proper resolutions to these threads at all.)

Finally, in the end, the Doctor regenerates. It's a perfectly-pitched scene, heads-and-shoulders above the rest of the episode, and delivered exceptionally well by Matt Smith. In my opinion there hasn't been a better regeneration in 50 years of Doctor Who. The writing is excellent, the direction is excellent, and even Jenna Coleman - whose acting I generally don't enjoy - is heartbreakingly good. Then, just when you think there's going to be an epic explosion of gold and white, Smith's face all but blinks out of existence, leaving Peter Capaldi in his clothes - staring like a madman.