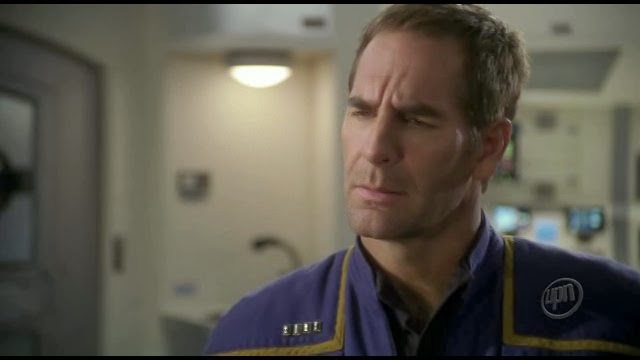 Okay, so back in the second season of Star Trek: Voyager there's this episode called "Tuvix". There's a transporter accident, Lt Tuvok and Neelix have their bodies fused, and a single humanoid creature named Tuvix emerges. When the Voyager crew discover a means of splitting him apart again, Tuvix doesn't want to go - it might restore Tuvok and Neelix, but he will die. At the episode's conclusion, Captain Janeway has him forcibly separated against his will. Everyone is reunited, and there's tidily no long-term repercussions that a Starfleet officer just willingly and openly murdered somebody because she wanted her friends back. It's a series-breaking episode, because no matter what Janeway does from that point forth, she's always going to be an unrepentant murderer.

Jump forward to 2004, and we get the Enterprise episode "Similitude". When Commander Tucker is mortally wounded in an engineering accident, Dr Phlox suggests a morally questionable cure: using an alien organism he can create a fast-lived clone from which vital neural tissue can be harvested and Tucker's life saved. Things don't go according to plan, however, when the Tucker clone - named Sim - doesn't want to die. We're back in the same situation as "Tuvix", and all that's left is to see what choice Captain Archer makes vis-a-vis murdering an innocent person.

They (the Star Trek production team) clearly learned a lesson from "Tuvix" because this time around they dodge the bullet by having Sim change his mind and volunteer to have his brain harvested. It's a cheap dodge, and it feels decidedly unpleasant because immediately prior to Sim making his decision Archer as good as promises him he's going to be forcibly harvested anyway. So while Janeway got to become a murderer, Archer merely becomes somebody who could be a murderer if his life wasn't quite as convenient.

There are individual parts of the episode that work better. Sim has all of Tucker's memories, and so is able to tell T'Pol that Tucker has feelings for her. Connor Trinneer and Jolene Blalock play these scenes very well, and they've managed to make what could seem like a shoe-horned romance into a natural progression for their characters.

Scott Bakula does a good job playing up Archer's torment, but the screenplay ultimately lets him down. It is, ultimately, a mean-spirited episode with a short-changed ending. Despite some good performances (Trinneer of course plays two roles), I just can't give this one a tick of approval. That leaves Season 3 with six good episodes out of 10, or a score of 60%.
Posted by Grant at 9:11 AM