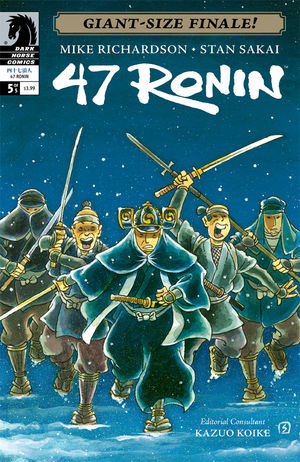 After a Christmas and New Year break, I'm back to the grindstone on the Pull List, reviewing all of the comic books that I buy each week. As this is the beginning of a new year, it's worth briefly looking back at 2013 to see what the highlights were.

For my money the best comic series of 2013 was Dark Horse's 47 Ronin. Mike Richardson wrote a highly effective adaptation of the Japanese legend, while Stan Sakai took a rare break from his creator-owned anthropomorphic animals to give the story exactly the sort of pastel-coloured, gently styled artwork that it needed. It may have only been a five-issue miniseries, but I gave every issue five out of five - it was simply that good.

Speaking of five out of five, across the whole year I awarded five stars to 115 comics - an average of 2.2 comics per week. Marvel had the lion's share of those with 48 five-star comics, although that came from a fairy narrow band of titles: Thor: God of Thunder, Young Avengers, Hawkeye and Daredevil accounted for 26 of those between them. Thor had the most five-star issues with eight, mainly due to the sensational "Godkiller" arc that kicked off that series.

If there's an award for Publisher of the Year, however, I really think it deserves to go to Image. The publisher has released a massive quantity of creator-owned titles over the year, across a range of genres. It's left the American comic book industry in a much healthier place that it was in at the end of 2012, proving that a broad range of genres can thrive outside of the "big two" paradigm of superhero comics. Image has successfully expanded science fiction through books like Black Science and Storm Dogs, horror through Revival, fantasy with Umbral, edgy drama through Sheltered and Lazarus and crime via Fatale, Dead Body Road and a number of others.

All up, I really enjoyed being a comic book reader in 2013, and have high hopes for the year ahead. Let's start reviewing: this week, the reviews cover All-Star Western, Aquaman, Batwoman, The Flash, Forever Evil, The Green Team: Teen Trillionaires, He-Man and the Masters of the Universe, Manhattan Projects and The True Lives of the Fabulous Killjoys.

Gray and Palmiotti's quest to improve the sales of All-Star Western is hitting ridiculous levels now, and it's harming what was one of DC's strongest books (creatively speaking). This issue concludes the team-up between Jonah Hex - who's still trapped in the 21st century - and John Constantine, with a guest appearance by Swamp Thing and a last minute cameo by Superman. It's all rather silly. It definitely feels like the plot, such as it is, is being dragged along by its guest appearances rather than those appearances coming naturally from the storyline. The result is a book that isn't likely to appeal to new readers, but is likely to drive away old ones. Not a good combination. (1/5)

Jeff Parker takes over Aquaman from this issue, and he's off to a great start by my reckoning with the introduction of a giant sea monster for Aquaman to fight. You really can't go wrong with Aquaman versus a giant sea monster; it's the kind of battle for which Paul Norris created the character. Paul Pelletier remains the lead artist for the book, which is a good thing - he's got a great style that really suits the character and his environs. (4/5)

When J.H. Williams III and W. Haden Blackman quit this book over editorial interference, I was all ready to quit with them - in fact I didn't buy issue #25 for that reason. That issue was a Zero Year tie-in. The issue before that ended with Batman and Batwoman at each other's throats. This issue begins with Kate and fiancee Maggie at an art exhibition, with no Batman fight to be seen. It's pretty galling of DC to just sweep a major story arc under the carpet and hope nobody notices. For one thing, what on Earth are they planning to do with the trade paperback? This issue is, in itself, quite entertaining and certainly a much brighter and hopeful take on the character than we're used to. I do want the last story finished, however, unless DC are happy to refund the money spend on the first 24 issues? (3/5)

This is a fill-in issue, which usually means something dull and disposable, but in this case it means a great little self-contained one-shot by Christos Gage and Neil Googe. How many superhero comics these days actually manage to tell an engaging story with beginning, middle and end, and introduce a fresh villain, all in the space of 20 pages? It's unexpectedly funny as well, and while I'm not familiar with Googe's artwork before this issue, I'll definitely be keeping a look out for him in future. This is a great little issue, and at US$2.99 there's no excuse not to buy a copy and give it a read.  (5/5)

Lex Luthor's makeshift super-team comes face-to-face with Batman and Catwoman - will they fight, join forces, or get interrupted by even more villains attacking them both? (Hint: it's the third one.) This is an enjoyable issue without being exceptional, which pretty much describes the entire Trinity War/Forever Evil storyline altogether. I've certainly read worse event comics, but I've also definitely read better. The highlight here is the outstanding work Johns is doing with Luthor as a protagonist, as well as the way he's developing the New 52 version of Bizarro. (This issue was actually published on 24 Dec 2013.) (3/5)

This is the penultimate issue for the Green Team: it was an intriguing idea, and certainly it's run its seven issues to date with a pleasant combination of writing and artwork, but the market is what it is and it simply didn't find a readership. On the plus side, I get the strong impression that this storyline will actually get wrapped up properly next month - Katana wasn't so lucky. When these eight issues are collected into their own trade paperback, it would be worth your while to check it out. This wasn't a classic comic, but it was a consistently enjoyable one. (3/5)

He-Man and the Masters of the Universe #9

He-Man, Teela and their companions continue to trek through the seven levels of Eternia's underworld in their quest to revive the Sorceress of Castle Greyskull. I vastly prefer Michael O'Hare artwork to that of Rafael Kanayan, who illustrated the first two parts of this arc. O'Hare has a similar style, but with just a bit more definition and control, and that makes a huge difference. Writing-wise, this is still a nice blend of pop fantasy and nostalgia-fest: probably not of interest unless you used to play with the action figures, but wonderfully entertaining if you did. (3/5)

Oppenheimer's takeover of the Projects begins to fall when a surgically altered alien creature - kidnapped and tortured by Einstein and Feynman - manages to spring loose. The fact that I can write sentences like the one above is testament to how odd and entertaining Manhattan Projects can be. This is a very funny issue, but at the same time it loses something of the weird, unsettling edge that's been a trademark of the book. The result is an issue that I enjoyed reading a lot, but which didn't ultimately satisfy as much as it should have. (3/5)

The True Lives of the Fabulous Killjoys #6
Dark Horse. Written by Gerard Way. Art by Becky Cloonan.
God I hate when this happens: this has been an enjoyable near-future slice of hipster science fiction with stunning art by Becky Cloonan. The art's stunning to the end, but the climax itself feels hurriedly written and all over the place. I was looking for something that would tie all of the threads together, but instead I got something that felt rushed and which hand-waved away all of my questions. It's a pity, because the five issues leading up to this showed a lot of promise. There's a chance the whole story might read better in trade, but at the moment I doubt it. (2/5)