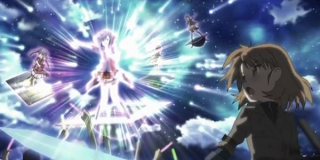 After a month of training, the recruits are granted a day off to relax and explore Akibastar. For some it's a chance to get to know one another better. For another it's an opportunity to meet the Successors of AKB0048. For the production team it's a chance to indulge in a little fan service with naked teenage girls having a bath together.

That's annoying. I get that fan service is a thing, and generally speaking female characters are going to accidentally flash their underwear at the viewer or somesuch, but in this specific episode it irritated me more than it usually would. Part of the problem is that the episode is overall a very lightweight one. It meanders along via a series of character vignettes but overall doesn't add a great deal to the series.

There are a few interesting elements. Linda and Sonati sneak off to investigate the elusive Sensei Sensei, aka S Quadruple, who controls the entire AKB0048 operation in secret. They don't appear to get anywhere, but it's an interesting plot thread and I hope it's developed later. Another mystery is why the performer in AKB0048's Centre Nova position always mysteriously leaves the group without explanation. Again I hope this gets revisited.

There is some nice character development between Nagisa and Chieri, who begins to re-develop their friendship over their mutual admiration of AKB Successor Yuko. Overall, however, it all feels like filler. For the first time in this series I actually felt a little bored. No thumbs-up for this episode, but with five episodes down it still leaves the series at a healthy 80%.
Posted by Grant at 11:27 PM