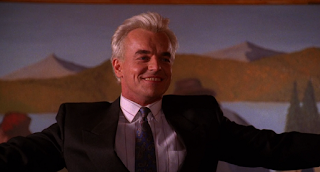 A lot of people remain very excited about the return of David Lynch and Mark Frost's Twin Peaks, so I am not too surprised that my review of the second season premiere was the most popular post on The Angriest this month. The Star Trek: The Next Generation reviews continued to be popular as well, particular those for "Timescape", "Descent" and "Descent, Part II".

In June I published one full-length essay, four reviews of new movies, another 10 reviews of older movies, plus reviews of 15 TV episodes, one anime episode, one CD, and 44 comic books. A full index of reviews published here and on both FictionMachine and FilmInk, is available below the cut.