Doctor Who: "The End of Tomorrow" 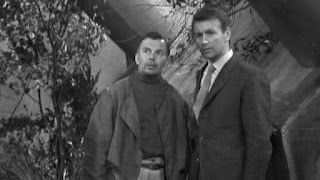 Barbara (Jacqueline Hill) and Jenny (Ann Davies) attempt to flee London in a truck. Susan (Carole Ann Ford) and David (Peter Fraser) attempt the same, using the city's sewers as an escape route. In Bedfordshire, Ian (William Russell) and Larry (Graham Rigby) are trying to go back in the opposite direction, but have not counted on the monstrous Slyther that stands in their way.

To a large extent "The End of Tomorrow" is a typical mid-serial episode of Doctor Who, in which everybody is effectively running from one place to another. The episode cross-cuts between three storylines, all about escape and a hope to reunite as soon as possible. Thankfully there is more to see than just running around; there is plenty of solid character work to be found as well.

It is worth noting that the Doctor (William Hartnell) does not appear in this episode. Hartnell was injured during the recording of the previous episode, and so took this episode off to recover. A stand-in named Edmund Warwick performs the Doctor's collapse unconscious in the episode's first scene, and that is the last we see of him. Susan and David hides his sleeping body in the bushes before exploring the sewers in a search for a way out of London.

The growing romance between Susan and David is fairly well written and performed. In future years Doctor Who would get a reputation for writing out characters very abruptly, but in this first exit (Susan leaves at the end of part 6) there has been plenty of foreshadowing and character development to make her exit at least a little believable. There is a strong sense of Susan finally growing up, and shifting from adolescence to adulthood. At one point Susan is menaced by what appears to be a very small and young crocodile; it is more amusing than anything else these days, but is part and parcel of the old movie serial style of Doctor Who in its early years.

Up in Bedfordshire Ian gets his first glimpse of the Daleks' mining operation. It is probably the least interesting of the three plotlines, although it is worth noting Nicolas Smith in his television debut: he would go on to famously play Mr Rumbold in the long-running BBC comedy Are You Being Served?. The Slyther that marauds the work camp is risible, and almost certainly the least convincing Doctor Who monster up to this point in the series. It is a shame that in a serial that has visibly had a lot of money poured into it that some of the money was not spent making the creature even a tiny bit convincing.

When Barbara and Jenny try to escape London it is in a stolen lorry, with Barbara slamming her foot on the accelerator to smash through a Dalek blockade on the road. Barbara is a marvellous character, set up here as an action hero before her time. She shows grit, resolve and intelligence. She really is one of Doctor Who's best - and most underrated companions. Jacqueline Hill plays her brilliantly as well, giving a performance full of nuance and depth - not to mention thoughtfulness.

While perhaps not quite as engaging as the earlier episodes, "The End of Tomorrow" is still a great part of "The Dalek Invasion of Earth". Series 2's 100 per cent quality record stands intact.
Posted by Grant at 8:58 AM