Star Trek: The Next Generation: Season 6 in review 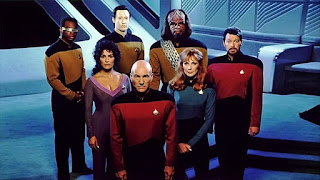 After rewatching all 26 episodes of Star Trek: The Next Generation's sixth season, it is time to take stock and consider the season as a whole before moving on to the series' seventh and final year. I think there is a general arc to the quality of The Next Generation: a generally poor first year, incremental improvements through the second and third, and a series running at its creative height through the fourth, fifth and sixth years. While Season 4 generally seems to present the series at its best, in terms of average quality, Season 5 and 6 both coast along providing what is by-and-large now a well-rehearsed formula. Whenever the quality drops to something particularly poor, it generally seems to be because the production was simply out of time and shot with whatever half-developed script was lying around.

That race to get 26 episodes produced each year is not something that's widely appreciated. All too often things get produced that are not good, but simply 'good enough'. Contemporary television, where HBO or Netflix might commission eight to 13 episodes in a year, is generally better and should be better. They have the time to make quality television. That The Next Generation can make 26 episodes in a year, of which 17 are good or better, is pretty remarkable.

One thing that does strike me as interesting about Season 6 is the series' growing willingness to attempt riskier kinds of stories. That includes making a full-blown and unashamed western ("A Fistful of Datas"), setting almost an entire episode onboard a Romulan warbird ("Face of the Enemy") and basing a story around a character's religious beliefs ("Rightful Heir"). Generally speaking, that risk-taking process resulted in pretty entertaining dividends.

Perhaps the most daring episode of all was "Chain of Command, Part II", which saw Captain Picard (Patrick Stewart) tortured and interrogated by a calmly sadistic Cardassian Gul (David Warner). The production team consulted with Amnesty International to present the most realistic interrogation methods possible in a prime-time American time slot, and the results made it one of the most disturbing episodes of Star Trek ever made.

In my opinion, the season's best episodes (in order of preference) were:
On the other hand, the season did have it's fair share of stinkers: