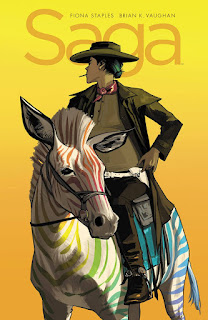 Saga re-commenced this past week, for its eighth story arc and its 43rd issue. As part of a marketing campaign to draw in new readers, this issue has been specially priced at just 25c, so if you have considered trying Saga before but never quite got around to it then this month gives you few excuses not to.

The story picks up in the provocatively named "Abortion Town", which is as good an indication as any of the sort of gleefully edgy and puerile touches that hang around the fringes of this title. It's funny, but also dramatic. It's wildly imaginative and absurd, yet always keeps a very relatable emotional core at its centre. Many of the character are adorable, and the plot has a tendency to shake itself up every few issues in unexpected ways.

As far as opening issues go this one is pretty great. New readers get a brief summary on what the general story is, and continuing readers get some nice moments with each member of the cast. I am not quite sure where the book is headed with this arc, but it has me solidly re-engaged. (4/5)

Under the cut: reviews of Doctor Aphra, Doctor Strange and Ladycastle.

In part 3 of "The Screaming Citadel" Luke and Aphra are still on the run from the vampiric Queen of Ktath'atn, but assistance has arrived with the arrival of Leia, Han and Sana. It is nice to see the iconic Star Wars cast interact with the various supporting characters of Doctor Aphra, but it has to be said this feels like one of this mid-story issues where everybody runs around in a panic but not a great deal of plot develops. Andrea Broccardo has a distinctive and slightly unusual style compared to regular artist Kev Walker, but it works very well. It's a solidly entertaining issue, but I do feel it's missing that little bit extra to make it pop. (3/5)

If Marvel was looking for an easy method of losing readers on Doctor Strange, I think they have nailed it. This is issue #21, featuring the debut of new creative team Dennis Hopeless and Niko Henrichon, except it is coming out before issue #20, which features the final segment of Jason Aaron and Chris Bachalo's run. What's more, this issue is a Secret Empire tie-in; if you haven't been reading Marvel's latest ill-advised and poorly received crossover miniseries event there really is not much there for you. There is a serious lack of respect for the readership in this issue, as well as a lack of respect for the new team: they deserve a chance to tell their own story, not provide an unnecessary tie-in to someone else's. (2/5)

If dialogue like 'Hold the line, my squirrel squires' immediately amuses you, then you should probably track down and read Ladycastle. This miniseries - which focuses on a fantasy castle run by women after a dragon eats the king and all of his men - has grown on me with every issue. It's a wonderfully silly comic with nice distinctive artwork and a lot of playful inversions of genre stereotypes. This final issue boasts a black knight with a challenge for the King (who is a woman), three trials of strength and wisdom, and an answer to the curse that has affected the castle for so long. I really hope this series gets a sequel - goodness knows it deserves one. (4/5)
Posted by Grant at 9:35 PM