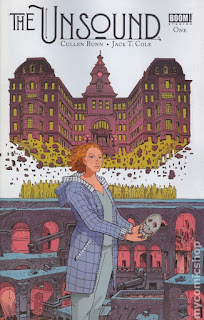 Ashli is a nurse undertaking her first shift at the Saint Cascia Hospital. It is understaffed, under-funded, and packed with too many people suffering from mental illness. Then there are the 'administrators', shadowy men in suits that Ashli is told to keep away from and with whom she should never make eye contact.

The Unsound is a new dark fantasy comic from writer Cullen Bunn and artist Jack T. Cole. Cole's art is wonderful. It has a sketchy, slightly off-kilter style that suits the material - as does his relatively pale and subtle colouring work. As for the writing...

It is an effective first issue, without a doubt. Bunn establishes Ashli well from the get-go, and she is a sympathetic and immediately likeable character. The entire city in which she lives has a slightly threatening, edgy aspect to it, which ramps up the menace from the get-go. Inside the hospital the fantasy and horror imagery is creative and wonderfully effective. The problem is the use of a mental hospital as a site for horror. Not only does it feel like an over-used trope, it feels like an inappropriate one. It makes fictional horror out of human illness, and that is a very risky idea with which to play. It's not impossible to make it work, but the risk of crossing a line and being offensive seems pretty great to me. I worry this is a great comic borne from a bad idea. (4/5)

Under the cut: reviews of Daredevil, Darth Vader and Giant Days.

Matt Murdock puts his crime-fighting master plan into action in this first part of "Supreme". It's a pretty great kick-off, not only featuring the beginning of whatever plan Matt has to fix crime in New York (it remains deliberately unclear) but also including a self-contained mini-adventure for Daredevil, Echo and Luke Cage. The tone may still be a little darker than I like - although much of that is down to Matt Milla's colouring and Sudzuka's extensive inks - but Daredevil is a pretty consistent and entertaining read at the moment. (4/5)

Kieron Gillen's 25-issue run on Darth Vader was a stunning comic book, rich with new characters and cleverly balancing the character's position between Star Wars and The Empire Strikes Back with a backstory presented in the Star Wars prequels. Best of all it concluded at a logical point and did not outstay its welcome. Clearly Marvel disagrees because here is a second volume of the title, now written by Charles Soule, that chronicles Vader's earliest adventures in the aftermath of Revenge of the Sith. From the first issue it feels deeply unnecessary, and there is nothing here that feels particularly impressive or inventive. What is worth, a fairly ropey comedic back-up strip has been inserted to justify a US$4.99 price tag: the comic itself is only 20 pages long, despite the thickness of the physical book. I would have been much happier with a new monthly focusing on a different character than simply copying a completed book. (2/5)

Esther discovers political activism in this typically charming and oftentimes laugh-out-loud funny profile of English university life. There's a wonderfully gentle ribbing going on in Giant Days, and in this issue in particular. It mocks disengaged young people, and the simplistic views of social causes that more politically active people often develop. Sarin and Fleming's art is utterly wonderful, and expresses so much humour and emotion through the character's facial expressions. This is such a great comic. It brightens my week every time a new issue is published. (4/5)
Posted by Grant at 7:43 AM