Star Trek: The Next Generation: "Descent" 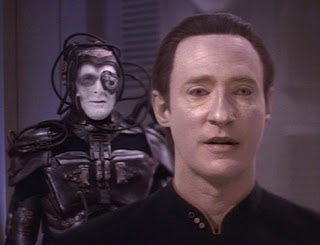 The Enterprise responds to a distress call from an isolated colony, only to encounter the Borg there - individual Borg who act with emotion and no longer seek to assimilate others. While fighting one of the drone Data (Brent Spiner) experiences rage for the first time. While the Enterprise continues to patrol the area for further Borg incursions, Data questions whether or not his quest to experience human emotions should continue.

"Descent" presents Star Trek: The Next Generation's fourth annual season cliffhanger, following in the tradition of "The Best of Both Worlds", "Redemption" and "Time's Arrow". It brings back the Borg for their fourth appearance in the series and follows up directly from their third: "I, Borg". That saw one Borg drone isolated from the Collective before being returned with a computer virus intended to disrupt their collective consciousness. Based on their behaviour here it appears to have worked. Aggressive, emotional and in total disarray, the Borg appear here as the weakest threat they have ever presented.

That causes the episode problems. One of the mail appeals of the Borg as originally developed was that they were close to unbeatable. In "Q Who" the Enterprise escapes entirely via Q's direct intervention. In "The Best of Both Worlds" they only succeed after the Borg have obliterated several dozen Starfleet vessels. Here they are just cheap and easy villains to shoot and kill. They feel dreadfully diminished and weak. Better to have left them alone after "The Best of Both Worlds" and maintain their appeal than drive them into the ground here.

The episode deals with Data's sudden emotional experience in a rather ham-fisted way. When a Borg is captured, and it confronts Data over his newly discovered anger, the episode makes no attempt to hide that Data is being influenced by the Borg in some way. The Borg twiddles a little knob on his arm, and suddenly Data is fantasising about murdering La Forge (LeVar Burton) to feel the anger again. It is sign-posted dreadfully when a much more subtle approach could have made for some genuinely tense television. It is easily the episode's most egregiously missed opportunity.

When the Enterprise follows Data and the Borg - who have left in a stolen shuttlecraft - it dives into a sort of space wormhole to reach the other side of the galaxy. It should feel like a momentous, frightening moment, but instead it feels like the Enterprise has parked at a local service station. When searching for Data's whereabouts on the surface, literally every key character gets sent down to help with just Dr Crusher (Gates McFadden) remaining to command the ship. Such a choice beggars belief: while it might be a nice opportunity to give McFadden some decent material for once, it makes no tactical sense whatsoever.

The episode ends on a cliffhanger, as did the previous season finales. In this one the mastermind behind this rogue community of Borg is revealed to be Data's twin brother Lore (also Brent Spiner), and he and Data - now turned evil - are planning to destroy the Federation. It is a moment that may work as a momentary shock, but in all honesty it is fairly silly.

Of the four season cliffhangers produced in The Next Generation, "Descent" is easily the least successful. It squanders its positive points, and backs them up with bad creative choices. It should feel like a huge climactic moment, but instead it actually feels a little weak. There have been 26 episodes in Season 6 overall, but this is not one of the 17 good ones. Season 6 wraps up with a quality ratio of 65 per cent.
Posted by Grant at 11:12 PM