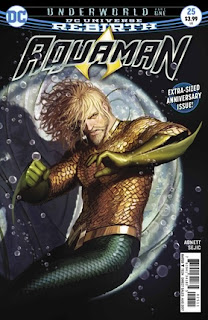 There I was, only two weeks ago, bemoaning that Aquaman never seems to find fresh angles any more, and seems dogged down by Aquaman arguing with Atlantean nobles and soldiers while trying to negotiate peace with the surface world. What a difference one issue makes.

Aquaman #25 sees Atlantis ruled by a new king named Rath, who covets magical items and who has sealed the city off from the surface world. Aquaman is presumed dead, but secretly lives on in the city's lower slums as a street-level vigilante: a sort of undersea Batman. It all feels exactly like the shake-up this book requires.

The new issue is immediately striking thanks to the presence of artist Stjepan Sejic, whose painterly work gives the entire story a very 'big budget' feel. Possibly to accommodate Sejic's process, the book has shifted back to a more leisurely monthly schedule. Combined with the new story direction, the art makes Aquaman feel the most exciting and dynamic that it has been in years. (5/5)

Under the cut: reviews of Batman, Daredevil, Doctor Strange and The Wild Storm.

Batman heads into flashback mode with the first part of "The War of Jokes and Riddles". 12 months on from Zero Year, the Riddler escapes from prison and immediately seeks out the Joker to propose a partnership against Batman. The conversation does not end well. Mikel Janin's artwork is sensational here, particularly in two hugely effective double splash pages: that's usually the sort of thing that irritates me, but they are so well placed and used that I found myself applauding them instead. Tom King is developing an excellent story here, with beautiful narration and dialogue. (5/5)

Matt Murdock's secret master plan to rid New York of its career criminals takes its next step this issue, and also finally gets revealed in a little more detail. For this it means heading into the courtroom. I always like it when Daredevil combines its superhero side with Matt's own day job as a lawyer, and this issue does that really well. It has smart dialogue and plotting, and Goran Sudzuka's stark but consistently effective artwork. It also has nice emotional change into something a little more upbeat than Charles Soule usually provides as writer. (4/5)

Dr Strange and Wilson Fisk team up to defend their corner of New York from Baron Mordu and the evil Captain America. This issue is well written and illustrated, but it suffers from the exact same problem as the previous issue: it is a Secret Empire tie-in. If you are not reading Marvel's current event miniseries then the events depicted here do not matter in any functional sense. You are, in effect, wasting your money on an irrelevant tie-in. Unless you're a completist, this storyline can be easily left on the shelf. (2/5)

There is a weird rhythm to The Wild Storm. It does not have the usual semi-self-contained structure of a serialised comic book. Individual issues don't build up to their own mini-climaxes. Instead they generally just hit 20 pages and stop, leaving readers to pick things up a month later when the next issue drops. The content is great - Ellis and Hunt are developing a wonderfully complex technology thriller with a lot of science fiction elements - but the weird structure really does make it feel as if this is going to read much more clearly once collected into a trade edition. (4/5)
Posted by Grant at 9:12 AM