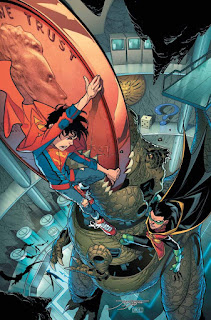 One of the things that always made me prefer DC Comics superheroes to their Marvel equivalents was the sense of legacy. Characters didn't always stick around, so when Hal Jordan stopped being Green Lantern there was Kyle Rayner to provide an alternative take. Oliver Queen was replaced as Green Arrow by his son Connor Hawke. Barbara Gordon made way for Cassandra Cain and Stephanie Brown. Likewise Dick Grayson retired as Robin, to be replaced by Jason Todd and Tim Drake.

A lot of that legacy got jettisoned under publisher Dan Didio, who pushed a return to the Silver Age iterations of the DC legacy heroes. That sense of history is slowly coming back, however, and nowhere does it seem more obvious than in Super Sons. The book exploits the fact that both Batman and Superman each have a son, and their starkly contrasting personalities and methods make for a great combination. Issue #5 picks up with Damian Wayne and Jonathan Kent having finished their first adventure together, but both in trouble with their fathers. Meeting up in the Batcave, they start taking their frustrations out of each other.

It's a great breather, giving room to develop character and cement the growing bond between them. Peter J. Tomasi's script has plenty of wit and snark, while guest artist Allison Borges really pushes a sense of fun about the book. It is such a pleasure to see the legacy angle revived; I can only hope the sentiment spreads to other characters. (4/5)

Under the cut: reviews of Britannia, Highlander, Poe Dameron and Rapture.

Britannia: We Who Are About to Die #3

The Roman detective Antonius is investigating a spate of murders among the nobility, and his search has led him to a seemingly supernatural gladiatrix named Achilla. Through her he hopes to prevent further deaths - including that of his own son. The Britannia books are packed with atmosphere, due in large part to Juan Jose Ryp's excellent and distinctive artwork, coupled with Frankie D'Armata's colours. Peter Milligan's script tells a relatively straight-forward but effective story, but really it's the sense of the world and the horror lurking beneath it that makes this book such a great read. This issue is no exception. (4/5)

Connor Macleod engages in a final showdown with John Hooke in 1985 New York. As this comic miniseries has acted as a prequel to the original Highlander feature film, there is little doubt of the outcome, but Brian Ruckley still finds room for some surprises; notably the appearance of another of the film's iconic characters. Andrea Mutti's artwork continues to give off a strong 1980s vibe, which has matched the tone of the script wonderfully. I'd be very happy to see more of Highlander in comic form, if it can match the sterling quality of this first miniseries. (4/5)

After a disastrous ambush, Poe Dameron regains consciousness in deep space, with only his droid BB-8 for company. In a field of debris from the battle they must find a way to survive. This is a cute one-shot story, although the low panel count works against the higher-than-usual page count to wind up feeling like a bit of a poor value comic book (at $4.99). It is a fun read, but ultimately a rather unnecessary one. (3/5)

The geomancer Tama has teamed up with a ground of superheroes - including British secret agent Ninjak and the supernatural Shadowman - to prevent a prophesised apocalypse from occurring at the hands of the mysterious "Babel". This issue sees Babel's backstory developed, as his plans develop to invade the mortal world from the shadowy confines of Deadside. There is a nice dark fantasy tone to this miniseries that blends surprisingly well with the more conventional heroics of Ninjak and his team. While imperfect, it's still pretty entertaining stuff. (3/5)
Posted by Grant at 9:04 AM