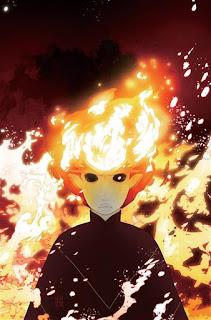 Kensho and Thurma are on the run with a crystal shard. Facing a prophecy that could spell the end of the world, an ageing Jen sets off on one final quest to retrieve the shard - unless the Skeksi Chamberlain finds them first.

We are now at the one-third mark of Archaia and Boom's 12-part maxi-series The Power of the Dark Crystal, adapting the screenplay for the never-produced sequel to Jim Henson and Frank Oz's 1982 fantasy masterpiece. I was always keen to read this comic to find out what the Jim Henson Company had in mind for the sequel. Based on the first four issues we lost a remarkably faithful and respectful follow-up, set a generation later and with a whole new angle on the characters.

Kensho and Thurma have an enormous amount of appeal as protagonists: both young and uncertain, both wildly out of their depths, and having to trust that what they are doing is the right thing and not a catastrophic mistake. The older Jen is also effective: he's harder but wearier, and really does feel like an old man rather than the idealistic and naive hero he was in the film. If anything feels a little misplaced it's the Skeksis, although that might simply be that they are less entertaining as still images than they are as bickering, gleefully vile puppets on screen.

This is a sequel that gets why the original work was so creatively successful. It is definitely worth fans checking out to discover what we lost. (4/5)

The Power of the Dark Crystal #4. Archaia/Boom Studios. Written by Simon Spurrier. Art and colours by Kelly and Nichole Matthews.

Under the cut: reviews of Detective Comics, Invader Zim, Poe Dameron and Saga.

Batman and Zatanna team up, while Azrael's replacement appears to cause a serious crisis in Azrael's mind. I am very ambivalent about this current storyline. On the one hand I love Zatanna, and absolutely adore her friendship with Bruce. On the other hand the Azrael and Order of St Dumas material simply is not that interesting. It is making parts of the book a bit of a chore to read, despite good art and colouring and Tynion's nice handle of character. (3/5)

Licensing issues means that there are sometimes terrible delays in getting copies of Invader Zim to Australia, at least that is the impression I am getting. This issue was in my 28 June pile, but it looks like American readers got it much earlier than that. A classroom mishap leaves Zim to hastily assemble a zoo in his backyard to prevent his classmates from realising he is an alien in disguise. This latest issue is pleasingly like the cartoon, with a hare-brained scheme, absurd comedy, and a slightly edgy and inappropriate tone for a children's property. Warren Wucinich's art lacks the sharpness of Jhonen Vasquez's original designs, but in terms of page structure and pace it remains fairly reminiscent of Vasquez's work. It's clearly really only of interest to fans of the cartoon, but altogether this is an enjoyable comedy book. (3/5)

The First Order has stolen an entire shipment of fuel bound for the Resistance - and what's more they have booby-trapped the fuel tanker left behind. Now Poe Dameron can't get off the ship, or allow it to slow down, if he wants to get out of this situation alive. It's broadly entertaining stuff, let down somewhat by the fairly generic nature of Poe's X-Wing squadron. We don't really know this characters, and the 16 issues of the comic thus far have not really expanded on them in any particularly significant ways. It's worth a read if you're getting impatient for The Last Jedi and need some new generation action, but arguably not beyond that. (3/5)

Well this series just got particularly weird again, but it's difficult to explain why without spoiling the ending. I seem to go through a regular pattern reading Saga as each six-issue story arc is released. I am initially disappointed, and sometimes even annoyed, but then by the time the fourth issue of the arc comes around I am suddenly captivated once again and desperate to find out what happens. To Vaughn's credit I am hooked on this particular storyline from its first part, and this second seems a real surprise. I have no idea where this story is going any more. (4/5)
Posted by Grant at 12:45 PM