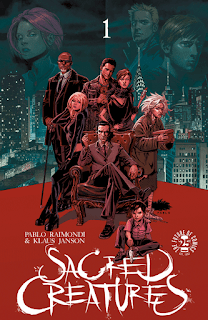 In Sacred Creatures, an unwitting university student gets dragged into a supernatural conflict at the behest of a mysterious and seemingly diabolical family of magically enhanced siblings. It takes its time in doing so too: this first issue is practically its own graphic novel at 66 pages of story, more than justifying its US$4.99 price tag. You're definitely getting value for money.

The art by Pablo Raimondi is detailed and enormously readable. The story, by Raimondi and Klaus Janson, is where the book struggles a little. It tells a reasonable enough story in many respects, but it is saddled by two core problems. First, it feels terribly out of date. Stories like this seemed very popular a decade ago, and to an extent it seems the book is simply retreading old ground.

Secondly it just feels fiendishly complicated. The book begins with an ominous but incomprehensible prologue, and then flashes back. Then a few pages later it flashes back again. Then it simply becomes a bit of a non-linear mess, so much so that for a few pages in the middle I became genuinely confused as to what was going on. It also introduces too many characters too quickly, making it difficult to engage with either the story or its relatively bland protagonist.

There is potential, but in all honesty I am not sure there is enough. Some story knots will need to get untied very cleanly in the second issue to make this a comic worth chasing down. (3/5)

Under the cut: reviews of Diablo House, Extremity, Giant Days, Rat Queens, Spider-Man and The Wicked + the Divine.

IDW launches a new horror anthology, telling the sorts of self-contained trashy horror stories that used to be 'de rigueur' in American comic publishing. This first issue follows two manipulative young Californians taking advantage of a taco store owner with supernatural results: it's functional and does its job, but there really is not a lot here that has not been seen many, many times before. Santiperez's artwork has an exaggerated, slightly grotesque style and is a good match for Ted Adam's script, but this is a pretty ordinary comic book. (2/5)

2017's best new comic book continues with an emotional kick to the guts. Thea is again dragged into her father's quest for vengeance, one that already appears to have cost him his relationship with his son. The violence feels real and appropriately awful, and the book feels more than ever like a tragedy over anything else. Johnson's artwork is strong and inventively presented, and his design and world-building is second-to-none. This is a dark and uncompromising work, which may lose it a few fans, but personally I wouldn't want it any other way. (5/5)

Something is amiss in the lock-up next door to the girls' rental, with strange noises waking them up in the middle of the night. Meanwhile Daisy is having relationship troubles. This is a rather sweet issue, with some more plot developments for the characters and a nicely silly central storyline. The real star here is Max Sarin, whose pencils have a lot more energy and motion than usual - in part, I suspect, due to the increasingly paranoid storyline. This is a warm comfort food of a comic, in the best possible sense. (4/5)

The Queens go dungeon-bashing, which means traps, secret doors and monsters. This book has always been a fairly obvious riff on the Dungeons & Dragons adventuring party, but I don't think it has ever been quite as obvious as it is this month. It's breezy and funny, and enormously self-aware, but at the same time there is a sense that Wiebe is slumming it a little. Earlier story arcs back in Volume 1 had a bit more of an emotional bite to them. Hopefully that will come, but for now it all feels a little easy and superficial. It's still pretty damned funny though. (3/5)

This is a great issue for anybody who has been reading Spider-Man for the past year. Goldballs finally makes his return to super-heroics, Miles and his mother finally have a key conversation, and at least one character relationship begins to shift in a new direction. On top of that there's also the growing problem of Black Cat's criminal enterprise, and the danger that Miles' interference may be placing him in. Guest artist Oscar Bazaldua does a reasonable job here too. In a series that often seems to drag its hells plot-wise, this feels like an issue with pace and importance. (4/5)

The Pantheon of Gods were supposed to have been killed by Ananke by now, and they haven't. Now there is "the Great Darkness" approaching, and none of them can reach a consensus on what to do. Cue enormous emotional mess as their fragile alliances begin to fall apart. There is an overall sense of doom and menace about this current arc, and I suspect the misbehaviours of past issues are about to get repaid. Crisp artwork by Jamie McKelvie and strong character work by Kieron Gillen. As always. Few creative teams are so brilliantly consistent. (4/5)
Posted by Grant at 10:55 PM