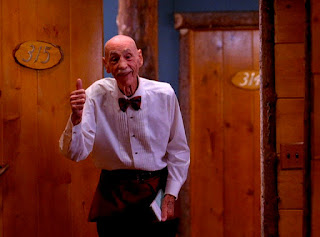 Nadine (Wendy Robie) and Leo (Eric Da Re) remain in comas. Agent Cooper (Kyle MacLachlan), shot by an unseen assailant, lies bleeding on the floor of his hotel room when he has a supernatural encounter with a giant. Donna (Lara Flynn Boyle) is pressed by the Log Lady (Catherine E. Coulson) to investigate Laura Palmer's 'meals on wheels' route.

Twin Peaks returned for its second season with a 90 minute premiere, written by Mark Frost and directed by David Lynch. From the get-go there is something off. Much was been written about the decline of the series during its second season, particularly once Lynch left the series following its seventh episode, but to be honest the rot - if we can call it that - has set in already. There is a wooliness to this 90-minute opener. It feels somewhat lost in its own storylines, and quite a few of them are simply not very good.

That said, the episode opens in a marvellous and deeply Lynchian fashion: Cooper lying on the floor of his hotel room, slowly bleeding to death from a gunshot wound, desperately trying to get help but failing entirely. An elderly room service waiter arrives with a glass of warm milk, entirely ignores Cooper's situation, and takes an interminably long time to leave. It is an impressive act of excruciating comedy, with Cooper presenting a weary resignation as he unsuccessfully tries to convince the man (played by a pitch-perfect Hank Worden) to call emergency services. There is a gleeful sense of delay to the scene: the Season 1 finale ended on a ten-character cliffhanger, and rather than resolve any of them Lynch forces his audience to watch an old man shuffle in and out of a room giving an enthused thumbs-up sign.

Cooper is then visited by a giant (Carel Struycken, immediately recognisable to any fans of The Addams Family or Star Trek: The Next Generation). The Giant relates to his three clues in the form of maddeningly obtuse statements: 'The owls are not what they seem." "Look for the man in the smiling bag." "Without chemicals, he points." This is the kind of surreality that showcases Twin Peaks at its best, so for this protracted first scene at least it seems that the series is relaunching in great shape.

After that it sadly begins to stumble. Donna returns after the season break with a new look and a weird new rebellious attitude that makes little to no sense. She sets off to start investigating Laura Palmer's meals on wheels route. Audrey (Sherilynn Fenn) is still undercover in the One-Eyed Jacks brothel, and winds up having to put on a mask and fend off advances from the lascivious owner - her own father Ben (Richard Beymer) - in a scene that's more icky than confronting, and certainly not a light-hearted as the cast and crew seem to play it. Leland Palmer (Ray Wise) wakes up in the morning to discover his hair has turned white. It all seems a little crazy and inconsistent, and absolutely suffers from having too many balls in the air at once - and many of them really are not too interesting. With the benefit of hindsight, a lot of Season 2 could have been saved by cutting the number of storylines in half and actually wrapping them up in turn before starting new ones.

There are some elements that work. Ed Hurley (Everett McGill) finally gets to talk out how he wound up married to Nadine instead of Norma (Peggy Lipton). The answer to the Giant's "look for the man in the smiling bag" is wonderfully creepy. Albert (Miguel Ferrer) is still around to caustically insult the locals and provide valuable forensic intelligence. To its credit the series does pause for a scene and actually lay out known events on the night of Laura Palmer's death.

The episode's final scene is a nightmarish highlight: Ronette Pulaski (Phoebe Augustine), the killer's other intended victim, finally wakes from her coma with a flashback to the night Laura died. We get to see Bob (Frank Silva), the long-haired man from Sarah Palmer's vision and Agent Cooper's dream, murdering Laura in an abandoned railway car. It seems we know now who the killer is - but where is he?

There is plenty of good material in this extended premiere, and certainly a lot of it book-ends the lesser material in between. There is a visible shift in the air, however, as the show suddenly feels a little less grounded and a little more over-the-top and exaggerated. It's not a shift I particularly like.
Posted by Grant at 9:07 AM