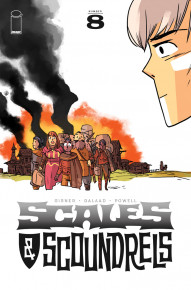 Her underground adventure complete, Luvander wanders into a regional conflict between two human dukedoms - and a mercenary of elves hired to win the conflict for the highest bidder.

In this excellent one-shot we get to see more the world of Scales & Scoundrels, as well as more back story for Lu: who she is, where she has come from, and the position her people take in the world around them. It is a difficult thing to write a one-shot: with only 20 pages free to write a story with beginning, middle and end, it is the sort of task that can divide a decent writer from a truly exceptional one. Sebastian Girner more than passes the test here. The issue is to-the-point, rich in detail, and satisfying on its own merits. It is the best issue of Scales & Scoundrels so far.

Galaad's artwork is elegant and simple, with a pleasing European style. It's particularly good in terms of colour, with nothing every feeling too overwhelming or busy. It's the perfect complement to the writing. (5/5)

Under the cut: reviews of Giant Days, Superman, and The Wicked + the Divine.

Daisy's grandmother has found out that she is a lesbian, and hasn't reacted well - not to her sexuality, but her hiding of it. Out of housing with the new year about to start, she's off on the hunt for emergency accommodation. This issue lacks the spark of most previous ones. It's less funny, but the dramatic aspects also feel far less dramatic and impactful. The whole issue is essentially fairly average: enjoyable, but by no means at the level of ones from recent months. (3/5)

The Bizarro-centric storyline keeps on keeping on, and for as long as it does my interest in the book wanes. I simply don't like the character: not the concept, not the execution, nothing. Despite some very pretty artwork by Doug Mahnke, this is simply not the comic for me at the moment. If you are a Bizarro fan, you should be in fine spirits - three issues and counting of the backwards talking, grey goon to enjoy. Meanwhile I'll be drumming my fingers waiting for it all to mercifully end. What is particularly disappointing is that this storyline marks the end of Tomasi and Gleason's usually enjoyable run. It would have been nice to see them bow out on a higher note. (2/5)

One of the benefits of The Wicked + the Divine nearing the end of its run is that Kieron Gillen has been able to line up plot developments and revelations - one behind the other - and just topple them like dominoes. Each issue builds on the last, with fresh surprises and reveals, and lots of doubt thrown onto the cast's pre-conceived notions of their past, present and future. Jamie McKelvie's artwork is as good as it's ever been, and once again beautifully coloured by Matthew Wilson. (4/5)
Posted by Grant at 12:52 PM