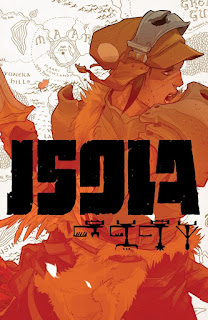 A soldier escorts a tiger through the forest, keeping an eye out for enemy combatants, monsters, and who knows what else. The soldier, named Rook, keeps referring to the tiger as if it is her queen. Something is clearly up, but it's not clear precisely what that is.

There's a deliberate choice to drop the reader in the deep end in the first issue of Isola, a new fantasy series from creators Brenden Fletcher and Karl Kerschl. What readers receive is an arresting and dramatic opening chapter, but it is one that deliberately raises a lot of questions while withholding all of the answers. It's a gamble, but one that seems likely to pay off - Isola #1 is absolutely tremendous.

The intriguing story is enhanced by Kerschl's tremendous artwork. It has the look of a high-budget American animation, with beautifully rendered characters and emotion. The art has a sensational sense of movement. It is easily one of the best illustrated books of the year. Mssassyk's colours are intense and rich, and further enhance the impact - particularly when it comes to the tiger queen Olwyn, an intense and expressive co-protagonist whose entire character is expressed via the artwork alone.

This really strikes me as a comic book you are going to want to join from the ground floor. (5/5)

Under the cut: reviews of Batman, Green Arrow, and Spider-Man.

Selina Kyle goes wedding dress shopping, Catwoman style, while recalling her long history with fiancee Bruce Wayne. It's a beautiful sort of tone poem of an issue, allowing Mikel Janin the opportunity to revisit moments from 80 years worth of Batman comic books and Joelle Jones a chance to illustrate Catwoman out on her own - Jones is writing and illustrating the next volume of Catwoman in a few months. This is the sort of thoughtful, slightly abstract Batman issue that Tom King writes so well - this is one of his personal best to date. (5/5)

A new creative team takes over Green Arrow this month, with Joyride creators Jackson Lanzing and Collin Kelly taking over the scripting and Marcio Takara (Nightwing) assuming art duties. A re-energised Oliver Queen travels to a war-torn Middle Eastern nation to help the recovery efforts - only to discover a mysterious masked villain named Nobody has raised a child army to take over. After nearly 40 issues of Oliver dealing with the Ninth Circle in his home city, it's a slight surprise to see him properly out in the field again. It's a solid issue, but there is nothing here yet that really sells the new arc. It's entertaining, but not exceptional. (3/5)

Miles Morales' uncle Aaron has taken on the identity of Iron Spider - with a stolen supersuit - and has now successfully stolen a SHIELD helicarrier with a team of criminals. Miles is hot on his tail, but where Aaron is taking the carrier Miles cannot go alone. This is a fast - arguably too fast - and energetic set-up for a climax. Big fights, twists and turns, and a wonderful guest cast. Not quite enough happens in terms of value for money, but things are looking promising for issue #240. Once again the cover does not reflect the story either - I swear on this book they just paint six random covers per arc and assign them to each issue off the cuff. It's the only explanation. (3/5)
Posted by Grant at 5:49 PM