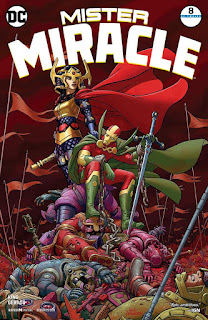 There is a remarkable rhythm to Mister Miracle, the 12-issue maxiseries by writer Tom King and artist Mitch Gerads. Pages regularly repeat the same angle across a nine-panel grid. The structure of each individual issue matches that issue's content. In the case of issue #8, Scott and Barda are taking turns between caring for their newborn son and leading the war against Apokolips. As a result the issues swaps back and forth with Scott, from their Earth apartment to the alien warzone and back, over and over, as their son gets older and the war progresses.

All the while there is still an overriding sense of dread. Each issue occasionally throws in a 'wobble' - a panel where the picture is distorted and messed up like a bad television signal. It is clearly leading somewhere, and given which moments are accompanied by it I am going to assume it isn't leading anywhere good. The unease throughout the series has been palpable.

This is such a wonderfully original and distinctive book. It has taken a genuinely fresh and innovative angle with two classic DC Comics characters. I really hope its success leads DC to consider more 'out of the box' adaptations of their various series and franchises. (5/5)

Under the cut: reviews of Antar the Black Knight, Daredevil, and Super Sons.

Acclaimed author Nnedi Okorafor re-tells the adventures of African-Arab legend Antar the Black Knight in this new miniseries for IDW. It is a relatively straight-forward telling so far, reasonably satisfying without really showcasing any sparks of inventiveness or originality that might make it stand out from the crowd. Likewise Eric Battle's artwork is reasonably solid and dynamic, with what feels like a fairly strong Todd McFarlane influence, but never really jumps out and forces the reader to take notice. It's enjoyable, but how much you want to read it likely comes down to whether you're a fan of Antar or a fan of Okorafor. (3/5)

The Kingpin lies in surgery, riddled with arrows shot by the Hand. Due to a quirk of New York law, Matt Murdock is now acting mayor in Fisk's stead - only Murdock is currently locked in the back of a police car, having been arrested in his guise as Daredevil. There's a lot of satisfying stuff going on in this issue, which pushes forward the plot from last month's anniversary issue and throws in a lot of wit, smarts and entertainment value. This book is really on fire at the moment, thanks to Soule's excellent plotting and scripts. (4/5)

Kid Amazo escapes Lex Luthor's clutches, and heads right for Robin and Superboy on a mission for revenge. The original story arc of this comic book returns for its climax, with all of the Superman titles about to get a complete re-jig and overhaul under Brian Michael Bendis. This first part is great superhero action of a kind DC produces really when it's at its best. The dialogue sparkles, the action is fast-paced and engaging, and the artwork is bold and entertaining. It's exactly what we should expect from a superhero comic. (4/5)
Posted by Grant at 1:14 PM