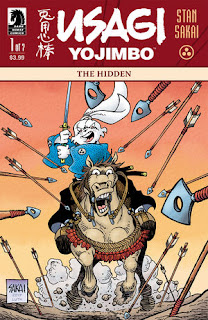 Two samurai ride into town, with a small army hot on their heels. They're soon dead, but whatever treasure they carried is stolen before their pursuers can find it. Now the wandering ronin Usagi Yojimbo is on the case, along with his good friend Inspector Yoshida - and the murder victims seem linked to the strange foreign religion that has been sweeping the land.

Usagi Yojimbo splits from its normal serial schedule to tell a special seven-part storyline with its own dedicated title. It's a smart move, making this a first issue that anybody can jump in on and enjoy. People should: Usagi Yojimbo is one of the crown jewels of independent American comic books. Sakai has been presenting the immaculately told and illustrated adventures of a samurai rabbit for decades now. His combination of clean, engaging storyline and feudal Japanese history and culture is superb.

This looks like it is going to be a great story as well, taking inspiration from the Shogunate's real-life crackdown on Christianity, during which time Japanese Christians were forced to hide their faith lest they be arrested, tortured and executed. The longer length also afford Sakai the opportunity to tell a more complex and involved story. I was already going to buy this one: you should check it out as well. (5/5)

Under the cut: reviews of Aquaman, Batwoman, Doctor Strange: Damnation, and Superman.

With Aquaman leading the mass revolution against Atlantis' new and corrupted king, this issue takes the opportunity to jump over and focus on that king himself: the odious Corum Rath. It is part prologue to what I assume is the final chapter of this revolution story arc, and also part flashback. It details elements of Rath's childhood and youth, and explains exactly how he came to be the villain that he is now. It's worthwhile stuff. DC Stalwart Kelley Jones does a great job with the art as well; it's starkly different to the painterly work of recent issues, but works wonderfully on its own merits. (4/5)

Just to get my standard complaint about Marvel event series out of the way: I would rather Marvel make this a six or even eight-issue miniseries and include all the story, than have a bare bones miniseries backed up by a group of random half-justified one-shots and tie-ins. At any rate, this is a pretty fun issue, with the demonic shell of Dr Strange going up against his own pet dog, and Ghost Rider charging up the side of building to challenge Mephisto face-to-face. There are great surprises and rewards, a lot of good action for Blade, good art by Szymon Kudranski, and some lovely red-dominated (of course) colouring by Dan Brown. (4/5)

I don't like Bizarro. That's the bottom line with this second part of Gleason and Tomasi's ill-advised "Bizarroverse" adventure. I think the character is incredibly dated, offers little in the way of genuine story potential, and is tiresome to read and translate his backwards dialogue. So Gleason's artwork may shine, and some of the character work among the regular characters may be solid, but this is simply not a very readable or enjoyable story. (2/5)
Posted by Grant at 12:11 PM