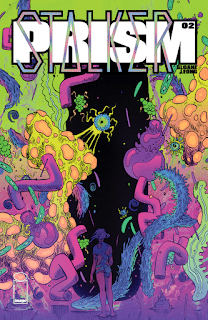 Vep has been taken from her home to serve the alien masters on Eriatarka. There she begins to learn about her environment and meet other students in the academy.

There is more than a small sense of Moebius about Prism Stalker. It has the same sort of world-building and surreal design. It hints at back story and context rather than spell it out to the reader. While the end result might feel a little confusing, I think to a large degree that is part of the book's charm. It's wonderfully strange.

Sloane Leong's script and artwork already feel more confident and effective in this second instalment. The art still looks somewhat haphazard, but the colouring pulls everything together. When Leong's art sings, it really makes an impression - it's just a pity it doesn't manage to hit those highs on every page. Nonetheless there is an indefinable appeal to Prism Stalker that lifts it well above the individual merits of art or writing. It has a weirdly effective cadence to it. (4/5)

Under the cut: reviews of Darth Vader, Detective Comics, Doctor Strange, Ninja-K, Oblivion Song, Sleepless, Sonic the Hedgehog, and Vs.

The Imperial invasion of Mon Cal (home to guest star Admiral Ackbar) begins, with the revelation of the Jedi that is secretly supporting the Mon Calamari from the shadows. If you are an ardent fan of Star Wars and The Clone Wars it would seem to be a satisfying reveal. For anybody else it's probably not going to have much of an effect at all. This issue boasts solid action, but feels a little too messy and unfocused to really excel. There are just a few too many characters getting juggled around. (3/5)

It was clear things were going to get worse for Batman before they got better, but the precise manner in which the story heads south came as something of a surprise. Quite how it is all going to work out is now a complete mystery: this is not the story that I assumed it was. Decent artwork by Javier Fernandez as always, and a palpable sense of rising peril too. My question now is how on Earth James Tynion IV is going to wrap this all up in the next few issues. (4/5)

Stephen Strange is trapped in hell while Las Vegas burns with Mephisto's legions. The Avengers are all trapped somewhere in hell with him. His only hope is Bats, the talking ghost of a dead basset hound. There is a wry humour to recent arcs of Doctor Strange (both by Cates and before him Jason Aaron) that really doesn't get acknowledged. Strange works in an insane environment, and faces really quite horrible things on a daily basis. The absurdity of that is something that the comics have come to embrace, and it gives a lovely distinctive edge to his adventures. (4/5)

It's time for a fresh story arc for Britain's super-spy ninja. Colin Kelly's back-up, code-named K-2, has gone rogue, and that sends Colin on an urgent mission to Mexico City to apprehend him. This issue, intended as a jumping-on point, has a bit too much Valiant Universe back story to be fit for purpose. While the action is good and well illustrated, Gage's script is heavy with narration and dialogue - and that tends to slow and bog everything down. It's a solidly enjoyable issue, but it's got quite a few problems in its way. (3/5)

Issue #1 of Robert Kirkman's new monthly comic book was all about grabbing the attention of the readership with an in-the-deep-end approach: a ruined city of monsters, and a man teleporting in and out rescuing people. Issue #2 takes a step back and delivers the back story that allows the first issue to make sure sense: a still-unexplained catastrophe hit the city of Philadelphia, transporting it to a terrifying new dimension of monsters and strange beasts. It is laid out well, although protagonist Nathan Cole still feels like a bit of a two-dimensional cypher. Even his name sounds a bit of a cliche. (4/5)

Gert, one of the Sleepless, lies murdered, while Cyrenic continues to experience worrying visions. For Poppy, the search for whoever is trying to assassinate her leads to one enemy in particular - although they may be more use as a friend. Sarah Vaughn's courtly intrigue is just a wonderful read, matched by Leila Del Duca's delicate and distinctive artwork. Image has been publishing plenty of fantasy books in recent years, but there is something about Sleepless - its setting, or perhaps its understated dignity - that is really making it stand out. (4/5)

IDW are not wasting any time with their Sonic the Hedgehog relaunch, releasing a second issue just one week after the first. This one is actually a little better too: the storytelling feels more confident, and Adam Bryce Thomas' artwork does an excellent job capturing the energy and speed of the character. There's a bit of story development, some humour, and nicely played action. For its target audience, this looks like a comfortable and enjoyable continuation of the long-running series Archie Comics found so much success with - it's a good bet that IDW will find success with it now as well. (3/5)

With its third issue, Vs takes a step behind the scenes to show the effect of protagonist Flynn's sudden rise in popularity on those running the televised war from behind-the-scenes. As with the first two issues, it is Esad Ribic's artwork that is the star here. It is the sort of big picture, widescreen depiction of the future that usually see in lavish French bandes desinees, not a monthly American comic book. The world-building is wonderful too, with Brandon taking his time to develop it for the readers. (4/5)
Posted by Grant at 1:09 PM