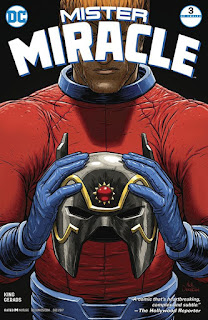 Scott Free is back on Earth, on leave with his wife Barda from Orion's new war against Apokalips. It soon becomes clear, however, that Orion's war ambitions will stop at nothing - including allowing millions to die.

The writer/artist team of Tom King and Mitch Gerads are back with a third issue of Miracle Man, the best arthouse take on a long-running DC superhero you're likely to find on the shelves. It is inventively staged and shows off a lot of complexity, combined with some lovely flashes of character throughout. It's a challenging read, but as the issues go on it's becoming an increasingly satisfying one - assuming you're in that crowd who already knows their New Gods from back to front.

There is a lot of assumed knowledge going on in this book, and I would be interested to see how accessible it actually is to readers unfamiliar with Jack Kirby's Fourth World comic books and their various spin-offs and sequels. Characters step into frame with barely an introduction, and key sequences rely on a foreknowledge of exactly who each person is and what their significance is in relation to the events. While this is a great issue, it hardly seems an accessible one. (4/5)

Under the cut: reviews of Daredevil, Detective Comics, Ms Marvel and The Wicked + the Divine.

When Daredevil was relaunched nearly two years ago he came with a new and unexpected sidekick named Blindspot. Their partnership, however, was short-lived, since Blindspot soon got his eyes gouged out by a homicidal Inhuman in a particularly shocking moment of violence. Now he's back, with new eyes and apparently a new master. It's nice to see this volume's original story arc get brought back and presumably resolved. Its very rewarding for readers who have stuck with the past 27 issues. It's definitely on the bleaker side, and that's a take on Daredevil I continue to be a little tired about, but it's well characterised and very nicely illustrated by Garney and Milla. This is rock-solid traditional Daredevil (4/5)

Tim Drake has been captured and taken outside of time and space. Now he's getting rescued by his own future self, an embittered Batman who murders without hesitation and is an enemy of the future Gotham City police department. Plus before they escape the prison they need to take down Doomsday, the Kryptonian super-weapon so strong that it once killed Superman. This is well-developed and gripping superhero drama, with a focus on one of DC's best characters - in two forms, no less. It's got some good back story, a fast pace, and a cliffhanger ending that points to a great storyline ahead. (4/5)

Still reeling from the events of the last few issues, Kamala is shocked to see Kareem, the teenager she met back in Pakistan, has joined her New Jersey high school class. When a runaway train threatens to derail, she discovers that the Pakistani hero Red Dagger has arrived in New Jersey as well. Apparently they train them stupid in the Marvel Universe, because neither Kamala nor Kareem appear aware of each other's superhero identities. To be honest it's all rather sweet. The runaway train sequence is great, managing to be exciting, funny and providing development for the characters all at once. It is going to be a very sad day when Wilson moves on from this book. (5/5)

"Imperial Phase II" continues its process of constantly ramping up the tension, peril and bodycount as the Pantheon of young gods completely self-destruct. Things seemed dire last issue with a prominent character death, but in retrospect it was just the lead-in to what was going to happen here. It's hard to imagine this series continuing for much longer, given how apocalyptic and climactic it seems to have become. It's all still beautifully put together, combining Gillen's exceptional script with McKelvie's distinctive and character-focused artwork. It's also important to acknowledge Matthew Wilson's vivid and rich colouring work, which really makes the drama pop off the page. I have no idea how many issues are left to this book, but it feels like I could probably count them with my fingers. (5/5)
Posted by Grant at 3:56 PM