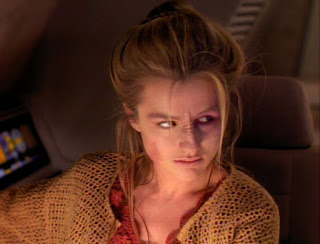 It is 7 February 1994, and time for another episode of Star Trek: The Next Generation.

Four junior officers onboard the Enterprise ready themselves for their staff evaluations; success can mean a much-wanted promotion, while failure could potentially set them back for years. One of them, Ensign Sito Jaxa (Shannon Fill), struggles to move on from her misconduct at Starfleet Academy, and finds herself under the stern attention of Captain Picard (Patrick Stewart).

So here's the funny thing: I have an essay in a new book, Outside In Makes It So (link here), which contains 174 separate pieces by a huge variety of writers with each piece focusing on a different episode of Star Trek: The Next Generation. My essay focuses on "Lower Decks", which is hands-down my all-time favourite episode of the entire series. It is probably my favourite episode of any Star Trek series. So part of me is sorely tempted to just point all readers in the direction of the book and have you read my opinions there. On the other hand it seems a little unfair to demand everybody drop US$24.95 plus postage - although you totally should go but it - so I suppose I'd better provide some critical opinions here for free.

This is a unique episode of Star Trek: The Next Generation because it takes a step down from the regular cast and re-frames the entire format towards the junior officers looking up. We see Picard as a distant authoritarian figure. We see Commander Riker (Jonathan Frakes) not as a jovial character as he often is with his friends but as a hard-edged and uncompromising taskmaster. We see Worf (Michael Dorn) as a supportive and genuinely caring superior officer. It's amazing how much stronger the series feels when we actually get to see the machinery that keeps such a large and complex starship functioning. The only other episode like it is "Data's Day", which is one of the few cases where we get to see the Enterprise working through day and night shifts.

Of course to present an entire episode from the junior levels requires introducing a raft of new characters at once, and selling them to the audience immediately. In a stunning feat of economic writing, René Echevarria - working from a story by Ron Wilkerson and Jean Louise Matthias - effectively simulates an entire parallel series. Will Ensign Sam Lavelle (Dan Gauthier) ever manage to impress Commander Riker? Will Nurse Alyssa Ogawa's (Patti Yasutake) manage to settle down her relationship with her boyfriend? Will the Vulcan Ensign Taurik (Alexander Enberg) overcome his obsessive nature to fit in better in the engineering department?

The episode's centre is Ensign Sito. She was barely visible in her first appearance, back in Season 5's "The First Duty". She was held down a year then for her helping to cover up a dangerous stunt that got a fellow cadet killed. Now she's on her first tour of duty onboard the Enterprise, struggling to escape that incident and failing at every turn. Finally an opportunity turns up for her to prove herself to her peers and even more so to prove herself to herself: a top secret and dangerous mission into Cardassian territory.

And then she dies. It's a vicious punch to the guts, because she only just got established and seemed to be such a promising, likeable character. We see the grief among her crewmates. We see the toll it takes on her superior officers. It stands in for the death of every other ensign and lieutenant that has died over the previous six-and-a-half seasons. They all had friends. They all had family. For arguably the one and only time, life on the USS Enterprise appears as dangerous as it likely is every single day. There's that running joke among Star Trek fans about 'redshirts': junior officers who walk into shot, beam down to a planet and get killed before the opening titles have even run. The regular cast get 177 other episodes to make their mark. "Lower Decks" belongs to the redshirts.

We're 15 episodes into Season 7. This is the eighth good episode, and it's an absolute classic. The quality ratio rises to 53 per cent.
Posted by Grant at 10:46 AM