Riverdale: "A Touch of Evil" 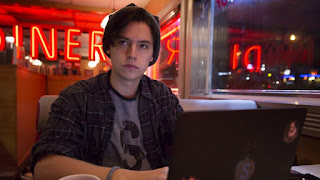 Riverdale still reels from the death of rich teenager Jason Blossom, and the mystery over who murdered him. Archie (K.J. Apa) struggles over whether or not to tell the authorities what he knows of Jason's death. Meanwhile Betty (Lili Reinhart) stops talking to Veronica (Camila Mendes) over her kissing Archie at a party.

Riverdale is an odd beast. It has a lot of positive elements: notably some great actors and a very well-defined mise-en-scene. At the same time it seems to want to be two different TV shows at the same time. My problem is that I am not really sure that either of the series Riverdale wants to be is one that I particularly care about watching.

For those looking for a weird blend of exaggerated Twin Peaks-style small town Americana and 90210 style teen soap are in luck with this show, since it aggressively combines both together. It's where they blend, however, that it struggles. It's comparatively easy to get drawn into the teen soap opera elements. Betty and Veronica squabble over how Veronica kissed Archie. Betty's mother doesn't want her hanging out with her friends. Jughead (Cole Sprouse) has had a falling-out with Archie, but perhaps they might reconcile their differences. This is simple stuff, and when done competently it is fairly watchable too. Lili Reinhart and Camila Mendes have a lot of chemistry, and make for engaging leads. Cole Sprouse is also intriguing, and turns a joke character like Jughead Jones into someone who's actually very interesting.

Archie (K.J. Apa) continues to be the series' most troubling element. He is ostensibly the star of the show, however Apa's performance seems low-key and sullen compared to his co-stars. His main dilemma this episode is over whether or not to admit to his principal that he had a summer affair with his music teacher, and that while together outside of town they heard the fatal gunshot that killed Jason Blossom. Archie angsts over whether or not to tell the truth, which actually makes his character rather unlikeable. Someone is dead, and yet he vacillates over providing information that could find the killer. His teacher-come-lover Miss Grundy (Sarah Habel) begs him not to ruin her life by revealing their affair. That makes her not only deeply unlikeable but a pretty repellent and manipulative statutory rapist. The manner in which their scenes are written and performed suggest we are supposed to feel badly for them. I certainly didn't.

When the murder mystery elements slip into the narrative, they feel weirdly forced. It's a little difficult to articulate, but they simply feel like they're intruding on a very different sort of show. Without it the series would actually function perfectly well as a teen drama in the vein of Dawson's Creek or Party of Five. With it, it feels a bit like an over-egged pudding.
Posted by Grant at 8:48 AM