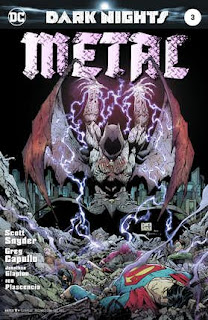 Scott Snyder epic and ridiculous story of dark universes and evil Batmen continues for a third instalment. This one feels as if the story has jumped forward a little too much, suggesting that all of those Batman one-shots in recent weeks were more of a necessary read that DC had previously suggested. What we get here is a lot of fast catching-up on how America is falling to the dark universe Batmen, followed by an assembly of remaining heroes working out a plan of fighting back.

The issue moves in fits and starts. It really does lack any iconic action, although the central hero meeting in the Oblivion Bar is a hugely enjoyable one. Fans of Detective Chimp will get an immediate thrill, as will anybody who enjoys these kinds of widescreen-style superhero event titles. The combination of characters is clever and effective, and while this issue feels like a bit of a drop in quality it does set up the future well.

Greg Capullo and Jonathan Glapion's artwork is excellent, and really sells the dynamic, over-the-top nature of the story. The colours by FCO Plascencia give everything a rich and dramatic look. It's imperfect, but this issue does keep Snyder's epic going. (3/5)

Under the cut: reviews of Action Comics, Doctor Who: The Lost Dimension, Hulk, Kull Eternal and Star Trek: Boldly Go.

Superman's encounter with his long-presumed-dead father Jor-El continues, while a suicide bomber holds the Daily Planet hostage. I am still hoping - likely in vain - that the mysterious Mr Oz is not Jor-El as he claims, but putting that aside for the moment this is a strong and dramatic issue. Like the best Superman comics it forces him into moral struggles, and makes him make difficult choices on where and how to use his powers. A last-page cliffhanger reveal really caught me by surprise. I was a bit ambivalent about where this storyline was headed; I have no idea whatsoever now, but I'm pretty excited. (4/5)

Doctor Who: The Lost Dimension Special #1

Two storylines (although three were advertised), both tying into Titan's "Lost Dimension" crossover. The first sees Professor River Song uncover a secret civilization inside an unstable asteroid. The second sees the Fourth Doctor and Romana find a confluence of parallel universe battle fleets emanating from a series of rifts in space/time. To be blunt: neither are particularly good. The River story is short and confusing, whereas the Fourth Doctor adventure combines a few too many returning monsters with some jaw-droppingly odd artwork. It all feels rather haphazard and rushed, to be honest, and does not seem to add too much to the overall crossover. Easily missed. (2/5)

Her latest adventure over, Jennifer reluctantly goes on a date. This is an unexpected tribute to the self-aware, direct-address era of She-Hulk comic books, as made famous decades ago by writer/artist John Byrne. While not anywhere near as successful as Byrne's splendid run, it is fairly amusing and a nice one-off throwback. Bachan's artwork does get a little distracting; there's a very uneven sense of perspective from panel to panel. It's a confection really, but one that does have a fair bit of entertainment value and acts as a lead-in to the next story arc beginning next month in the retitled and renumbered She-Hulk. (3/5)

It has been a bit of a wait between the first and second issues of Kull Eternal, a new series that takes Robert E. Howard's heroic fantasy character and throws him across time into a science fiction story. It is a clever blend, using the mythical setting of Kull's usual adventures as a base, and then stepping out into various settings. The bulk of this issue focuses on revolutionary America, with Kull coming face-to-face with General George Washington. It's odd, but also oddly effective. Pizzari's artwork and Farrell's colours give everything a bold, classic kind of a look. (3/5)

Legendary Starfleet captain Garth has suddenly re-appeared, swapping places with James Kirk and stealing his identity. Like most issues of Boldly Go, this is a enjoyable but unchallenging read. It's entertaining for fans of the recent Star Trek films, but a broader audience really isn't going to find anything here they're not going to find in a better form in original books elsewhere. I do like Megan Levens' artwork, however; she has a slightly more abstracted and less photo-referenced look that helps to make the stories more engaging. (3/5)
Posted by Grant at 9:16 AM