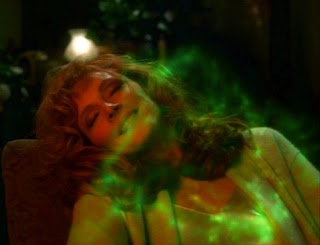 It is 31 January 1994 and time for the worst episode of Star Trek: The Next Generation ever made.

This is not a drill. It's not an exaggeration. It is not as if I have forgotten all of those absolutely dire episodes made all the way back in Season 1, or the cobbled-together clips show that concluded Season 2. The truth is that "Sub Rosa" trumps them all with easily the most ridiculous and unsuitable premise ever pushed into the series, and a very poor execution of that already unfortunate concept. To momentarily use the episode title convention of Friends, this is "The One Where Dr Crusher Has Sex with a Space Ghost".

The Enterprise visits the colony of Caldos IV so that Dr Crusher (Gates McFadden) may attend the funeral of her grandmother. Caldos IV is a colony deliberately styled upon 18th century Scotland. While staying in her grandmother's cottage, Crusher is visited by a spectral apparition that calls itself Ronin; the same apparation with whom her grandmother appeared to be having a passionate love affair. As Ronin and Crusher enter into a romance of their own, she decides to resign from her Enterprise post to remain with him.

Poor Gates McFadden. Of the entire regular Next Generation cast, she gets to be the protagonist of episodes the least. When she does get an episode to herself, it is almost invariably terrible. This time around the writer's room have outdone themselves, although specific credit goes to Jeanna F. Gallo for the original idea, Jeri Taylor for the story and Brannon Braga for the script.

The Scottish setting is a weird one. It clearly exists to set up the windswept, romantic nature of the story, and to establish a gothic tone for pastiche purposes (two of the guest characters are named after characters from The Turn of the Screw). At the same time it aesthetically feels less like Scotland and more like an idyllic green Ireland setting akin (and potentially inspired by) John Ford's The Quiet Man. Not only does it feel a little confused, it feels weirdly tokenistic and silly. It's perhaps not as silly or stereotypical as the Irish colonists back in "Up the Long Ladder", but being a close second to 'objectively terrible' is nothing to be proud about.

The notorious ghost sex is flat-out embarrassing - McFadden sorts of writhes around inside a green energy field - and the climactic possession by Ronin of Grandma Crusher's corpse is pretty off-colour. It's also worth considering how the episode effectively has Crusher be sexually assaulted - Ronin has a supernatural influence over her - and yet attempts to portray it as something at least briefly romantic or erotic. It is not a good look for anybody involved. Duncan Regehr flails valiantly as Ronin, but the bottom line is that he's not exceptionally good (he later plays Shakaar in Deep Space Nine very underwhelmingly) and he's trapped with an awful character.

McFadden, to her enormous credit, gives the episode 100 per cent. She fully commits, whether she's stumbling around a storm-wracked graveyard or rolling around in a chair covered in green smoke. She deserves better; for the entire seven seasons of The Next Generation she deserved better.

By the episode's climax there's a sudden attempt to shoe-horn the ghost stuff into science fiction terms, which means the planet's climate controls go haywire to launch a storm at just the dramatically appropriate moment. It also leads to classic Next Generation technobabble such as 'he realised one of my ancestors had a biochemistry that was compatible with his energy matrix'. Nice try Braga, but a ghost is a ghost. You didn't fool anyone.

Once again we have a Season 7 episode focused on a character's family. This comes after episodes about Worf's brother, La Forge's mother, Data's brother, Troi's mother and Data's mother. There are so many family reunions going on this year that one wonders if the Enterprise has any real missions to undertake.

So obviously this episode is not going to improve Season 7's quality ratio. It's laughably bad. It leaves the season with 14 episodes, only seven of which have been good. The ratio drops once again to an even 50 per cent.
Posted by Grant at 10:08 AM