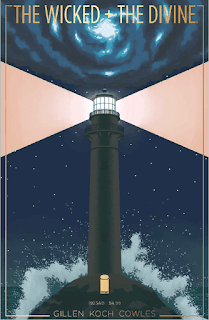 Another one-shot special for The Wicked + the Divine, showcasing the Pantheon of a former generation. In this case it's the immediately preceding group from 1923. I really love these WicDiv one-shots, partly because they offer other artists the chance to play in the series but partly because it allows Kieron Gillen to experiment with storytelling style and format.

He goes all-out here, with a lengthy issue that's half comic book half prose short story. It's a technique I've seen before - Grant Morrison did a sensational issue of Batman like this once - but in this case Gillen really knocks it out of the park. It's one big Agatha Christie pastiche, with comic images used only to showcase the climactic moments. Aud Koch's artwork is superb, and fits the tone and style of the book perfectly.

Gillen captures the 1920s perfectly. His prose is purple - it feels deliberate - and his cast of gods reflect numerous literary identities and works of fiction. It is tremendously clever stuff and, coming just as the main storyline seems primed to wrap up, it's perfectly timed too. (5/5)

The Wicked + the Divine: 1923. Image. Written by Kieron Gillen. Art by Aud Koch.

Armstrong and the Vault of Spirits #1

Armstrong gets his first-ever solo comic in this one-shot from Fred Van Lente and artists Cafu and Darick Robertson. On a once-a-year occassion, Armstrong opens his vault of wines - one for each year of his life - and shares them with friends. It's an excuse for a lot of jokes, a bit of action, and a fairly tedious Biblical parody woven throughout. It's an okay one-shot, but hardly a must-read. Fans of the character will have a lot more fun than anybody else, but for the general reader it really doesn't bear considering. Valiant publish much stronger books than this - check out last week's Quantum & Woody instead. (2/5)

After 36 issues of build-up, it seems the story of Green Arrow versus the Ninth Circle boils down to this: a sidekick's life in the balance, mother pitted against son, old enemies seeking revenge, and separated allies reconciling. It's all climax, which automatically makes an issue an exciting read, and Ferreyra's rich, colourful artwork emphasises that sort of intensity. If you have been reading Green Arrow over the last two years or so, it's a must-read. If you're thinking of sampling it, maybe start with the trades and catch up. (4/5)

The cadets face alien monsters in the barracks, where their mechs are unable to help them. It's a nice change of location and style, shifting the story from giant robot action to something more akin to Aliens. Takeshi Miyazawa's artwork is appealing, but it's really worth highlighting Triona Farrell's bold and eye-catching colours. The colour red in particular pops off the page here, and the comparative limited palette keeps everything bold and clear. We generally don't appreciate colouring enough. (3/5)

With their companions seemingly dead, Koro and Dorma must stand together against the mysterious demon that murdered their friends. This book has delivered a consistently entertaining Dungeons & Dragons pastiche, combined with absolutely wonderful art by Galaad. I always adore an artist that can convey tone, emotion and style in just a few loose lines. What this issue adds is much-needed back story and depth to Koro and Dorma. They are richer characters thanks to this issue, and further build Scales & Scoundrels up to being one of this year's must-read books. (5/5)

Two storylines from the long-running Italian Disney comic Topolino get an English translation, thanks to IDW. The first storyline is of interest to Disney enthusiasts because it pairs Donald Duck up with his cousin Fethry; a character that debuted in Italy and has never appeared in animation - just in comic books in Europe and South America with very rare appearances in English language books. It's backed up by a shorter strip that has a typical Disney charm. These comics are really incredibly even in quality: they're rarely exceptional, but they're always enjoyable and funny for an all-ages audience. (3/5)
Posted by Grant at 9:07 AM