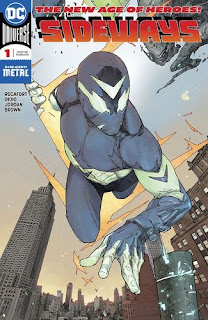 Teenager Derek James was caught in Gotham City when reality split in two and a giant castle appeared (see Dark Nights: Metal for the full details). As a result of that experience Derek can now travel between dimensions and from one place to another on Earth by slipping through rifts in space. It seems the perfect excuse to become a superhero - until more powerful forces in the DC Multiverse notice what he is doing.

Credit where it's due, DC Comics is currently launching a group of all-new superhero monthlies with a combination of all-new characters and fresh takes on old team books. It's a brave move, since the odds are decidedly against any new superhero book in the mid-to-long term. The books are also unusually artist-focused, adopting the so-called "Marvel method" in which artists develop and then draw their own plots, and writers are brought in at the end to put together the dialogue. It certainly keeps the artists happy, but more often than not it results in weaker storytelling and less interesting comics.

That's sadly the case here. Sideways is a good-looking book thanks to Kenneth Rocafort's art, but the story (by Rocafort and Dan Didio) simply isn't very interesting. While there's always potential to develop characters over time, commercial pressures will likely kill Sideways before Rocafort and Didio can. This new character has simply failed to get out of the gate without tripping up. He looks and feels completely generic, and this first issue doesn't have enough plot to hook the readers in. It's a missed opportunity; one that I hope doesn't discourage DC from taking more risks in the future on new books and ideas. (2/5)

Clayface is dead, fatally shot by Batwoman with a sniper rifle. When Gotham City is temporarily safe, its guardians are now set to fall apart from within. This rift is going to take a lot to heal: by taking a life Kate has destroyed Bruce's trust in her. A devastated Cassandra may never forgive her. Tim fears the events that led to his murderous future self are coming true. Stephanie cannot bring herself to stay with him any more. It's all tragedy and set-up, as one long-running arc comes to a close and another opens. It's emotive stuff for long-term readers, and yet given the drama available it almost feels as if Tynion's script doesn't go far enough. This is really good, but it has no excuse not to be great. (4/5)

Kamala Khan is still missing from New Jersey, leaving her friends to put on Ms Marvel costumes and protect the streets to the best of their ability. They're certainly put to the test here, bringing their current situation to breaking point and forcing them to call in help from interstate. There's a lot of great character-based humour here, and also a very satisfying and simple progression of story from one situation to a much more desperate one by issue's end. The longer they keep Kamala out of the picture, however, the bigger the inevitable payoff is going to need to be. No pressure. (4/5)

Everybody is after Lor San Tekka. The Resistance desperately need him to track down the elusive Luke Skywalker. The First Order want the same thing so they can kill Luke Skywalker. Poe Dameron almost rescued Lor, but was beaten to the punch by the traitorous First Order Agent Terex. Now he's running out of time to get him back. This issue feels like the point where a story arc stretched one issue too long. While stuff does happen, and the plot does progress, it feels like everything has been stretched just a little too far. Angel Unzueta's artwork reflects the film characters well, but at the expense of feeling a little stiff. (3/5)
Posted by Grant at 10:32 AM