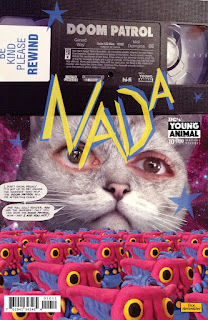 We're now 10 issues into Doom Patrol, Gerard Way's loving tribute to Grant Morrison's legendary run on the same characters, and it's become pretty clear there isn't going to be much in the way of a fresh angle or take. The weirdness remains and seems absolute: individual ideas are fresh and funny, but they are all using an identical format and structure.

That sounds perhaps like a bad thing, but it's arguably a good thing instead. Many writers have tried to chart their own course with the characters, and none of them have been particularly popular with fans or successful sales-wise. Way's nostalgic run with the Patrol is easily the most acclaimed the title has been in decades.

Nick Derington, Tom Fowler and Tamra Bonvillain make this a visually wonderful book. When it comes to this kind of poppy, strange surrealism, it's usually Michael Allred who is behind the art and it's nice to see another talented group of artists have a go instead. It's bright and colourful, nicely cartoonish and exaggerated, and keeps everything feeling rather light-hearted and upbeat. (4/5)

Under the cut: reviews of Poe Dameron, The Wild Storm, and X-O Manowar.

The heist to rescue Lor San Tekka hits a critical snag as Poe's X-Wing is stolen by the enemy, and Tekka himself is on a fast road back to the First Order. It's been a long road to this point, with the entire series essentially filling in the story of how Poe got to the opening scene of The Force Awakens. Angel Unzueta's artwork is strong, Leia continues to be a welcome premise, and the prequel trilogy references are smoothly incorporated. Why is it then that this whole arc feels a little long and unnecessary? It's entertaining to an extent, but it could be a lot better than it. (3/5)

Here's the thing with The Wild Storm: it's all build-up. We're 11 issues into Warren Ellis' 24-part epic reboot, and barring one or two brief action sequences it's all been development of character, expanding the cast, and establishing both the back story and status quo. Now it's great stuff: the dialogue sparkles, the characters are distinctive, and Ellis' talent for near future SF is working a charm. With each passing issue, however, it puts more pressure on the future of the book to pay it all off. It's great for now, but sooner or later this has to give away to a more pro-active and energetic story. (4/5)

Aric may have united a planet, but it turns out not everybody wanted to be united. Now he's on the run, getting hunted down by a group of alien bounty hunters with nothing to rely on but the X-O armour he's been trying to avoid. It's an all-new story sarc for Matt Kindt science fiction epic, one that essentially shatters everything Aric has built for the previous 10 issues. It's potent story territory: conquering a planet may come easy to some, but ruling it afterwards? That takes a completely different skill set; and it's a set Aric simply doesn't have. Great art and colours, a nice sense of pace, and a real insight into Aric's character. X-O Manowar continues to be one of the very best. (5/5)
Posted by Grant at 4:44 PM