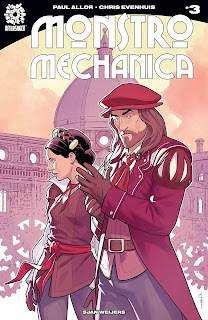 Leonardo Da Vinci has built a sentient wooden automaton, and used it as part of a siege of the town Volterra. He dispatched his apprentice Isabel to oversee it in action - just as he assigned Isabel to reset the automaton's memory each time it was used. Isabel failed to do the latter, and it may destroy her chances of doing the former, since the automaton has learned - and the only thing it has been taught is war and violence.

I am really enjoying Montro Mechanica, a Renaissance-era fantasy from creators Paul Allor and Chris Evenhuis. The dialogue is smart and the historical setting well researched. The artwork is crisp, clean and well-proportioned. Sjan Weijers' colours have a soft sort of pastel quality to them that has an unusual and interesting effect.

Monstro Mechanica is out via independent publisher Aftershock, which means it's not going to be in every local comic book store and it's not going to have a huge marketing budget. If it sounds like your kind of a book then order a copy in, or grab a copy via Comixology. It's one of the best new books out at the moment. (4/5)

Under the cut: reviews of Giant Days, She-Hulk and Spider-Man.

This issue catches Esther and Ed in the aftermath of their pub crawl from the last issue. Ed is hospitalised with two broken ankles. Esther has a monster hangover, and a visit from her sisters Sarah and Lottie. I think Lottie is a firm contender for character find of the year (I'm aware it's only February). She's 10 years old, and smart, snarky and wonderfully funny. With the regular cast taking turns minding her for a few hours each, she has a remarkable effect on each of them. I'm usually a big fan of any issue of Giant Days, but this issue is particularly strong. Funny, wise, heartfelt, and addictive. (5/5)

Jennifer's mental health has not been good since she woke from a Thanos-induced coma to find her cousin Bruce Banner had died. Now, having almost killed someone while fighting the Leader, she resolves to face her darker self once and for all. Sure this issue is a bunch of pop psychology, but it's enormously effective and emotionally involving. It feels like She-Hulk - the recent stuff, the classic self-referential Byrne stuff, all of it. It brings the character back towards her more upbeat status quo just in time for the series finale next month. It's a shame to see the book go once again, but it will be back eventually. Marvel can't stay away. (4/5)

Miles Morales comes face to face with the new - and villainous - Iron Spider, and it turns out to be his presumed-dead criminal uncle Aaron. Isn't that always the way? Good without being great, this current "Sinister Six Reborn" arc is going through the motions competently, but is not entirely grabbing my attention. It's partly because it doesn't feel as emotionally focused as other Spider-Man arcs, and it's partly because the story feels a little splintered into multiple threads: Miles and Aaron, Miles' parents, Lana and her mother, Hobgoblin trying to go so, Danika's secret, and so on. It would benefit from a little streamlining. (3/5)
Posted by Grant at 9:04 AM