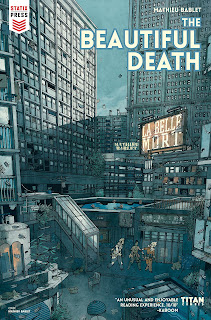 It's the final issue of The Beautiful Death, and with the alien insects massing - and just two humans left on Earth - it seems that it really is the end of the world. Everything comes to such a grant, beautiful conclusion. Sure it's sad - possibly sadder than many readers expected - but it's also tonally perfect and wonderful lyrical.

Mathieu Bablet has made a masterpiece of tone here. The artwork and colours are both beautiful and melancholic, and the characters are hopelessly imperfect. Quiet apocalypses are rare. As readers primarily raised on American pop culture we're used to enormous explosions, screaming crowds and mass panic. The Beautiful Death is the other kind. It has maintain an eerie stillness for most of the time. It's felt silent too, which is a remarkable achievement for a comic book.

Admittedly the narrative stumbles a little at the end, and some readers may even feel a little cheated - but that tone, and that style. It's profoundly effective. (4/5)

Atomic Robo and the Spectre of Tomorrow #4

Atomic Robo continues to fight his billionaire neighbours while working to overcome a mysterious cyborg invasion of the Earth. I adore the tonal blend of the Atomic Robo comics. They inevitably lead to action, but there is also a charming amount of humour and light-hearted banter. There is also the odd moment of genuine sitcom-style comedy, such as a telephone call to Elon Musk that occurs during this issue. The characters are likeable, Scott Wegener's artwork is simply but immensely expressive, and bottom line: there's a reason Atomic Robo keeps getting new miniseries. It's pretty great stuff. (4/5)

Abram and Mishka have travelled to the end of the universe to rescue their infant son - now they must face a near-infinite pantheon of gods and aliens to save him. It's a great climax to yet another good Valiant miniseries. Matt Kindt ups the cosmic quotient for the finale, but it never gets too abstract or woolly. The artwork by Trevor Hairsine and Ryan Winn is strong. Like many of Valiant's books, it opens the door to a sequel in a way that doesn't cheat the reader but actually feels satisfying. It's a great read. (4/5)

Imagine spending all of your time trying to invade Earth, only to discover another alien civilization conquered in years ago? That's a great hook for a highly-strung character like Zim, and Eric Trueheart gets a wonderful amount of comedy out of it. Oni's Zim comic book rises and falls in quality, rarely being anything worse than mediocre but rarely being any better than reasonably enjoyable either. This is one of the enjoyable ones, which captures the tone of the cartoon well as has vibrant and bold art and colours from Maddie C and Fred C. Stresing. (3/5)

Gerard Way's Doom Patrol relaunch has been a relatively fun exercise in surrealism and nostalgia, but when expanded to this extra-length format with a slightly more complex and serious take all of that fun seems to dive out of the window. There's something weirdly tedious about it all, if the book's writers Way and Steve Orlando are more impressed with their work than any reader is likely to be. It's slow too, and seems to take its sweet time getting to its better parts. There is talent at work here, but for some indefinable reason it all jars when it should entertain. (2/5)


Valiant. Written by Daniel Kibblesmith. Art and colours by Kano.

Quantum and Woody on opposite sides of the law. A heist on a facility full of the world's strangest super-weapons. A missing father. The goat. And so on. There's always a goat. This is a fantastic issue of what's shaping up to be a great new volume of Valiant's comedic superhero double act. The panel layouts are superb, and wonderfully inventive. Kano's art and colours accentuate the humour brilliantly. I've always had a soft spot for Quantum and Woody, and Christopher Priest's outstanding work giving them their own specific style and tone. This new book does them justice. (4/5)
Posted by Grant at 10:59 PM