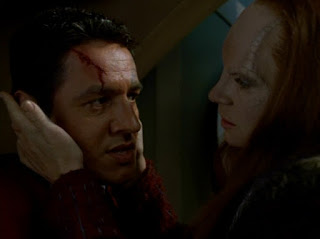 It is 20 November 1995, and time for another episode of Star Trek: Voyager.

Voyager is raided by the Kazon who, with the help of the Cardassian spy Seska (Martha Hackett), successfully steal components to develop their own transporters. Unwilling to let Starfleet technology alter the balance of power in the region, Janeway (Kate Mulgrew) begins to develop a plan of attack. Before she can initiate it, however, Chakotay (Robert Beltran) steals a shuttle to recover the components on his own terms.

Seska returns this episode, after leaving the Voyager crew for the Kazon back in Season 1's "State of Flux". In some ways it's a predictable return, but in other ways it makes very little sense: Voyager has been flying away from Kazon space for about 10 months, and the idea that the less technologically advanced Kazon Nistrim have followed them the whole time - and still manage to convene meetings with other Kazon clan leaders - suggests that either the entire Kazon civilization is on the move, or Kazon territory is much larger and their starships much faster than everything else in the series suggests.

Still it's nice to have Martha Hackett back, and unshackled from Seska's cover story she can now play at being a full-blown villain for this point onwards. She plots, she schemes, she manipulates those around her, and by leaning heavily on her earlier romantic liaisons with Chakotay writer Kenneth Biller can make the antagonistic relationship between them a personal one. Chakotay's one-man mission to recover the stolen transporter components is a little inconsistent with how the series has been going. Back in Season 1 I noted how quickly the Maquis crew integrated into a Starfleet way of life, and having them suddenly jump back into their rebellious rule-breaking ways actually makes the entire situation less convincing. A gradual integration would have benefitted the series much better.

Guest star Anthony De Longis - actually a noted stunt and weapons coordinator when he isn't acting - brings a lot of presence and charisma to Seska's new boyfriend: the Kazon Nistrim leader Culluh. While he appeared in Season 1's "State of Flux" he gets a lot more to work with here, and exploits the material wonderfully. He actually takes what has been a remarkably dull group of aliens and gives them a sense of individuality and personality. He, Hackett and Beltran do a lot of decent acting here that lifts an otherwise ordinary episode into something that's quite enjoyable.

By the episode's end, Chakotay is rescued by Voyager and receives a badly-needed dressing-down by his captain. It's a weird scene, since he clearly deserves a major punishment for directly disobeying orders and stealing an entire shuttle. There's potential for a strong dramatic scene here, where Janeway cannot actually punish him because she needs him too much to run the ship. That potential slides by, however, and the scene simply lacks the necessary punch. A last-minute shock coda - 'Seska is carrying Chakotay's baby!' - is weirdly unconvincing.

This is the sixth enjoyable episode of Season 2 out of 11 so far: the quality ratio rises to 55 per cent.
Posted by Grant at 1:53 PM