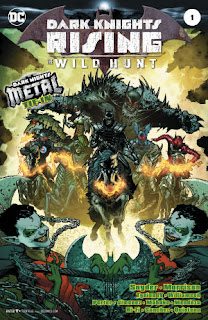 It is not a surprise to see Grant Morrison's name on the cover of The Wild Hunt, alongside co-writers Scott Snyder, James Tynion IV and Joshua Williamson. This entire Metal tie-in positively screams Morrison, not simply because it's playing with a lot of his ideas - the Multiverse, inter-dimensional harmonic travel, and the like - but because structural it feels like a Morrison event book. It boasts a wide cast of second-string heroes (Batman, Superman and Wonder Woman are MIA), has a complex and jargon-filled story that is packed with offhand references, and scenes that are almost implied rather than played out. You definitely get your money's worth here, as long as you keep up with it.

There is always a certain disjointed quality when a book has multiple art teams on it, and despite three strong teams working here there don't precisely sew up together. It's up to the reader whether that's a big problem or a minor one.

The biggest criticism that can be levelled at this book is that it really deserves to be an issue of Dark Nights: Metal proper, as it tells a whole section of story that improves and illuminates the main narrative. A few too many readers will skip it, assuming it's unnecessary. I'm not sure that's the case. (4/5)

Under the cut: reviews of Action Comics, Doctor Strange, and Xena: Warrior Princess.

Superman and Booster Gold remain trapped in an alternate future where General Zod rules an entire planet. Unfortunately, it's a pretty boring kind of a future, and it's taking a lot of issues for this current story arc to do anything particularly interesting. Even the occasional short segue to Lois Lane sneaking into a wartorn African country to rescue her father isn't very engaging. For a book building towards its historic 1,000th issue, there really isn't any worthwhile sense of urgency here. (2/5)

Stephen Strange is currently working pretty well as the Marvel Universe version of DC's John Constantine: lying pretty much seems to be a force of habit to him now. He's lied to Zelda. He's lied to the Sentry. He's lied to Loki while fighting to regain his title as Sorcerer Supreme from the Asgardian trickster. Now all of those lies are collapsing around him, even as he looks set to get what he wants. It's a climax that feels a lot more satisfying than the issues leading up to it, and it puts the comic in an interesting place going forwards. This looks like a decent point for any prospective readers to jump onboard. (4/5)

Dynamite are launching an all-new Xena: Warrior Princess miniseries, although in all honesty it is difficult to work out precisely who this new book is for. The first issue retells Xena and sidekick Gabrielle's first meeting, which basically means 20 pages of a fist-fight in the woods peppered with a bit of fairly ordinary snarky dialogue. Vicente Sifuente's artwork depicts the TV characters well enough, but Meredith Finch's script simply shows fans something they've seen before told in a particularly bland fashion. This is never going to attract new readers, and I cannot imagine this retread is what existing fans really want to see. There is enormous potential for an ongoing Xena book - the perennial success of Conan the Barbarian comics is testament to that. Dynamite have simply dropped the ball here. (2/5)
Posted by Grant at 8:57 AM