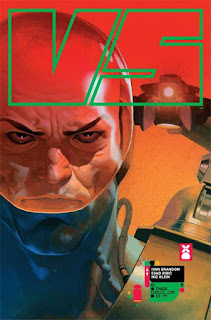 In the distant future, war has transformed into a spectator sport. Massive audiences cheer on heavily armoured and equipped soldiers as they take one another on in small groups. Satta Flynn is one such soldier, famed for his skill but recovering from serious injuries sustained in the field. Repaired and re-dispatched, he finds out just how hard the fights are starting to be.

Another month, another new science fiction series kicking off at Image. The selling point this time around is absolutely artist Esad Ribic, whose painterly work - which has been beautifully coloured by Nic Klein - gives this first issue an immensely glossy, high budget feel. It's more reminiscent of Metal Hurlant than an American comic book.

Ivan Brandon's script shows promise, but with a lot of large panels (including five splash pages) there really is not a lot of room in which to establish a story. It looks tremendous, but it is honestly too early to say if the story is going to watch. One to watch, for sure - the potential is huge. (4/5)

Under the cut: reviews of Batman, Daredevil, Exit Stage Left: The Snagglepuss Chronicles, and Superman.

Batman and Wonder Woman once pledged to temporarily replace an eternal warrior that guarded a magical gate from an endless swarm of demons. Now that pledge has been called in, leaving them unwittingly trapped in a Sisyphean hell where time moves much, much quicker in the real world. While Selina Kyle minds the warrior for an evening, Batman and Wonder Woman find themselves trapped fighting monsters for decades. It's a high concept idea, and wisely Tom King doesn't stretch the story out for more than this second part. Joelle Jones' artwork is excellent too, and marvellously accentuated by Jordie Bellaire's colours. (4/5)

No great twists or changes here, but some effective development of the story regardless. Wilson Fisk has been elected Mayor and is working to turn New York into a gangster's paradise. Meanwhile the inhuman (and also Inhuman) serial killer Muse has returned, and newly appointed Deputy Mayor Matt Murdock cannot persuade Fisk to treat it seriously. This is a nice pulling-together of Soule's previous story arcs, which gives every issue a strong sense of climax. It's a great book for Daredevil fans at the moment. (4/5)

When it was first announced, The Snagglepuss Chronicles seemed like the weirdest DC Comics treatment of a Hanna Barbera character yet. Now that it's two issues in, it turns out that if anything that first announced low-balled the strangeness of it all. The aspiring pink actor cat of the TV cartoons has been re-envisaged as a New York playwright in a story about anthropomorphic animals, McCarthy anti-communist hearings, and closeted gay men struggling to emotionally survive. The first issue felt a little weak, but the second kicks things up a notch. It's bizarre, but bizarrely wonderful too. (4/5)

Superman and Superboy travel halfway across the galaxy to save the people of a planet doomed by its imminent destruction - only to discover that the people, all religious zealots, don't want to be saved at all. It is an intriguing moral quandary, made worse when the zealots use their powers to rid the Kent boys of their own. It's a solid science fiction story, well told by Robinson and immaculately illustrated as always by Doug Mahnke and inkers Mendoza and Hanna. It's issues like this that make me a Superman fan. (4/5)